Listening to choir music from a "sampler" CD sent me by the music publisher.  It was right before Christmas, so I was trying to select some Easter music.  (Being a choir director messes with your seasons)

Anyhoo, right in the middle of a beautiful Holy Week cantata, sung by a choir full of to-die-for voices you never actually find in a choir, one of the narrators told the story of the arrest of Jesus.

She got to the part (Matt 26:51) about one of the disciples cutting off the ear of a servant with a sword...and she very earnestly pronounced the "w".   I replayed it several times to make sure I heard it right.

Somehow I could never listen to that passage of Scripture with a straight face again.  Your mind is weird that way. 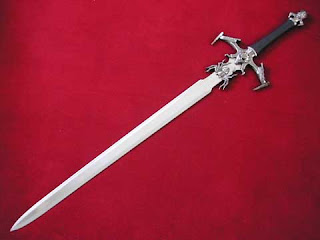 Sword: weapon of offense and defense in personal combat, consisting of a blade with a sharp point and one or two cutting edges, set in a hilt with a handle protected by a metal case or cross guard. The sword may have developed from the dagger at the beginning of the Bronze Age. It was not, however, until the more durable iron sword was introduced in the early Iron Age that the sword became an effective weapon. Greek and Roman swords were very short, with pointed ends, and had two cutting edges. Medieval knights used two types of swords: a short sword with a pointed end that was used with one hand and a heavy two-handed sword with a rounded end. During the Middle Ages the best blades were those made by the Arabs in Damascus and Toledo. Swords were widely used in the Middle East and E Asia as well as in Europe. The scimitar, used by the Persians and Arabs, is a curved steel sword. One of the best known of the East Asian swords is the Japanese samurai sword, consisting of a curved single-edged tempered steel blade set in a long handle. As a highly personal weapon the sword attained symbolic importance; surrendering one's sword became a token of submission, and the custom of taking an officer's sword away from him and breaking the blade when he was dismissed from the service in disgrace arose because a sword is the mark of an officer and a gentleman. During the Crusades and later, the sword, because of its shape, frequently was used to symbolize the Cross. The sword is now obsolete as a weapon and is carried in some military units for decorative purposes in times of peace. Special types of swords are the rapier, the épée, and the saber.

[More stuff you may not have known about swords.]
Posted by John Phipps at 8:24 PM