At first I began to emit hoots of derision over the fact that surprisingly few Americans even know what cap-and-trade is basically about. 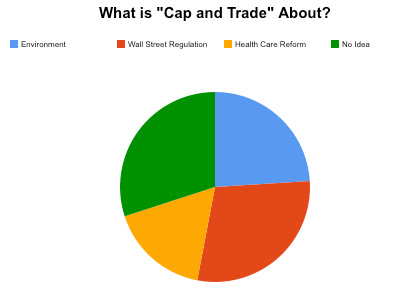 
Given a choice of three options, just 24% of voters can correctly identify the cap-and-trade proposal as something that deals with environmental issues. A slightly higher number (29%) believe the proposal has something to do with regulating Wall Street while 17% think the term applies to health  reform. A plurality (30%) have no idea. More]

But maybe we're missing the implications here. To begin with, public polling under these conditions means diddly squat.  It's like asking third-graders about accelerated depreciation. Public discussion could be little more than totally crossed wires, and absent a massive and problematic education campaign, could remain so indefinitely.

Under conditions like this, won't many voters simply follow the most trustworthy-seeming voice?  Or even more powerfully, their intuition?

To be more precise: "For each three degrees that local temperature rises above normal, Americans become one percentage point more likely to agree that there is 'solid evidence' that the earth is getting warmer." Maybe this explains why national surveys that ask people whether they believe in global warming tend to fluctuate fairly significantly, even over a few short months' time.
Bonus finding: This local-weather effect is strongest on people who aren't particularly partisan, and it's pretty much non-existent for people who identify strongly with one party or the other. Committed Republicans tuning into Rush aren't likely to believe in man-made climate change no matter how sweaty it gets, while ardent Democrats won't stop listening to Al Gore just because there's a cold snap the day he's testifying before Congress. But for many people, this stuff appears to have a fair-sized impact, however scientifically iffy it might be. [More]

So what I'm thinking is if the crucial vote on cap-and-trade comes about mid-July, the combination of summer temps and Obama's approval ratings will be enough to make pollsters report a poorly informed approval for such regulation.

Nor do we have the kind of independent leadership in Congress to not follow the polls.

We could be looking at a whole mess of "change", simply because so many of us don't understand what is going on.
Posted by John Phipps at 3:57 PM

OK, I give up what is 'cap and trade' exactly?

My understanding is that it is a tax on carbon use. I don't exactly know how it would work, why it is necessary, and why it is such a attention grabber. I do know that if it is a tax, ultimately I will pay it as a consumer. Only agriculture cannot charge more because their costs have risen, all other business either can or will surely try to pass the expense on to the consumer. It is going to get more expensive to live. I suspect that will be the main change coming out of the 'cap and trade' idea. If the US is the only country that is trying to decrease it's carbon footprint, how much benefit is there?

I appreciate your honesty. I will post ASAP on "Cap-and Trade 101" and will try to be more even-handed than usual. The post will address your questions directly, with alternate views.

That said, I'm hoping I'm in the field this time tomorrow and for the next two weeks.

Here in MI there is quite a lot of field work going on. I think that still things are a week or more behind normal. I don't know whether I am glad that I am not farming anymore or sad for the same reasons. I hope you get started planting. Bill