I'm in charge of lady beetle eradication in our house.  Because I can reach the ceiling with the vacuum.  And I am an expert with that power tool, as with many household chores.

But how many of those rascals are there? And why have they moved in?


The little guys are called multicolored Asian lady beetles.They are related to our native ladybugs, but the name ought to be a tip-off that they are not American citizens.
Our native ladybird beetles spend the winter protected by piles of leaves or in crevices. The Asian cousins overwinter in cliff faces. Imagine how disappointed they were to come to Michigan and find a complete lack of cliff faces. So they took the next best thing, and that was large vertical surfaces called house walls.
In the early fall, they mainly land on southern and western sides of houses and squeeze themselves into cracks.
Eventually, they end up in the wall void between the outside wall and the inside wall. On sunny days, the wall void heats up and the little lady beetles pop out next to windows or under baseboards. Your tiny aliens aren't outside; they are already in and just coming in a bit more.
They are under the misguided impression that spring has come.
While they are wandering around, they don't eat or damage anything. The only damage may occur when you bash them and cause them to stain a surface with their bodily fluids.
And whose fault is that?
Since they are just coming out of dormancy, pesticides rarely kill them. Their metabolisms are too slow. Grab the vacuum and suck them up. [More]


This species was possibly established in North America as the result of introductions into the United States in an attempt to control the spread of aphids. Whatever the source, in the last two decades, this insect has spread throughout the United States and Canada and has been a prominent factor in controlling aphid populations.
In the U.S., the first attempts to introduce it took place as far back as 1916. Repeated efforts were not successful. In the early 1980s, aphids were causing significant problems for growers of pecan trees, so the United States Department of Agriculture again attempted to bring the insect into the country—this time in the southeastern United States, using beetles brought from their native region in northeastern Asia. After a period of time, USDA scientists concluded that their attempts had been unsuccessful. However, a population of beetles was observed near New Orleans, Louisiana around 1988, though this may have been an accidental introduction event independent of the original, planned efforts. In the following years it quickly spread to other states, being occasionally observed in the Midwest within 5–7 years, and becoming common in the region by about 2000. The species was also established in the northwest by 1991, and the northeast by 1994, in the former case quite possibly involving additional introductions, rather than reaching there from the southeast. It is reported that it has heavily fed on soybean aphids (which recently appeared in the U.S. after coming from China), supposedly saving farmers vast sums of money in 2001.
Many people now view this species as a nuisance[4], partly due to their tendency to overwinter indoors and the unpleasant odor and stain left by their bodily fluid when frightened or squashed. (It is also currently increasing in Europe to the detriment of indigenous species, due to its voracious appetite which enables them to out-compete and even eat other lady beetles, as it also does in the United States.)
In addition to its household pest status, it has been reported to be a minor agricultural pest (contaminating crops of tender fruits and grapes)[5] in Iowa, Ohio, New York State, and Ontario[3]. The contamination of grapes by this beetle has been found to alter the taste of wine[6]. [More]

I can tolerate them dropping off the ceiling into my supper dish, but I draw the line at wine contamination - especially our cherished Iowa wines. 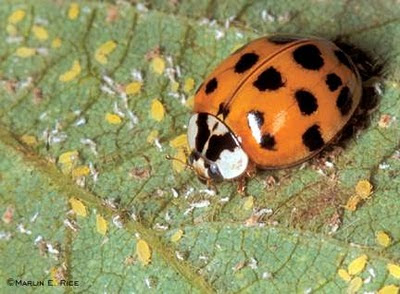 I suspect milder winters aren't helping. And to be fair, I haven't had to spray for soybean aphids yet either.

Still, cute wears off after a few million.
Posted by John Phipps at 4:28 PM

Please let those beatles go as I,with little success try too keep as many around for summer as I can too eat those darn aphids-regards-kevin

I central illinois we had a swarm of late fall (soybean) aphids. I think due to the late arrival from the north and the latter beans. You have been far enough south to avoid. They rarely reach springfield in time to warrant sprayng. Last year, it came down to planting date and relative maturity of the beans, along with geogrphic location. I had to (decided to) spray June 12 planted 3.8 beans at Williamsville. So, it is a year to year thing here, but fairly common to spray north of here.