Many folks upset at the "trilions and trillions" of dollars in liquidity pumped into the global economy to replace consumer demand are poised in breathless anticipation of inflation or even hyper-inflation.  Every day I become more convinced they are looking at the wrong numbers.

Indeed, even the most vigilant inflation hawk, would be hard pressed to show much evidence of consumer inflation - a rise in the price of goods and services.

But meanwhile, asset inflation is brisk indeed.  Consider stocks, for one.


The CHART OF THE DAY displays a price-earnings ratio for the Standard & Poor’s 500 Index that’s based on average profits for the past decade, as compiled by Yale University Professor Robert Shiller. Grice used the data to reach his conclusion, outlined in a report today.
Shiller’s cyclically adjusted ratio stood at more than 20 times earnings this quarter as the S&P 500 headed for a fourth straight quarterly gain, the longest winning streak since 2007. The index rose 5.2 percent through yesterday.
“The risk is there -- as it always is -- but the returns aren’t,” Grice wrote. The Shiller P/E is within the highest of five ranges since 1881, when his calculations begin, the report said. When the S&P 500 was similarly expensive, returns averaged 1.7 percent a year for the next decade, according to Grice. The comparable figure for the lowest range was 11 percent.
Stocks also cost too much relative to “intrinsic value,” based on his projections for earnings and asset values. He made that judgment after analyzing shares of non-financial companies in the FTSE World Index, a benchmark for developed markets. 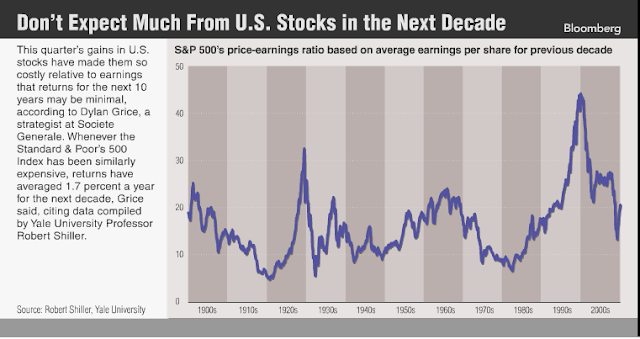 Another closer to home data point is farmland. I think it qualifies because the returns (rents) are not keeping pace with values.  In other words, the p/e is creeping upward.

Why do we have this new kind of inflation?

I have a very simple answer to this question: Follow the money. Whether an economy generates asset price inflation or consumer price inflation depends on the details of to whom cash flows. In particular, cash flows to the relatively wealthy lead to asset price inflation, while cash-flows to the relatively poor lead to consumer price inflation.
Why? In Keynesian terms, poorer people have a higher marginal propensity to consume. The relatively poor include people who are cash-flow constrained — that is they cannot purchase what they wish to purchase for lack of green, so their marginal dollar gets immediately applied to the shopping list. Also, poorer people may be different, there may be a correlation between poverty and disorganization, lack of impulse control, inability to defer gratification etc. Think of Greg Mankiw's Spenders/Savers model.
Except when the world seems very risky, no one holds cash for very long. Poorer people disproportionately use their cash to purchase goods, while richer people disproportionately "save" by purchasing financial assets. If the supply of both goods and financial assets is not perfectly elastic, then increases in demand will be associated with increases in price. If relative demand for goods and financial assets is a function of the distribution of cash, what price changes occur will be a function of who gets what. [1] [More]

This is an indicator of income distribution.  Until most consumers get income increases, I can't see consumer inflation picking up steam, which means there will be less reason to raise interest rates and also more reasons to invest in non-monetary assets like land and stocks.

In short, we may have a positive feedback loop set up that will baffle policy makers and investors for some time to come.
Posted by John Phipps at 11:29 PM

Email ThisBlogThis!Share to TwitterShare to FacebookShare to Pinterest
Labels: inflation

John. Speaking of positive feedback loops, you have to see this one. An interactive map showing the growth of WalMart in the US from 1962 to present. No wonder our imports from China are so large.

Thanks for giving such a piece of wonderful information.I will provide you with sexy models who will doing Massage with you and also provide you sexual body to body massage. Make you our daily customer having body massages in dehradun with my organisation, you are visit our website and book online appointment with instant discount offers.