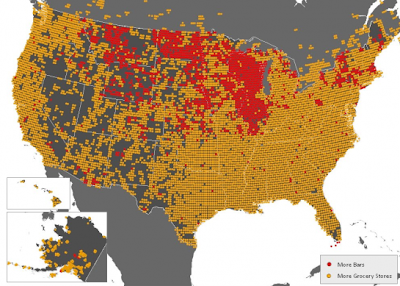 FloatingSheep, a fun geography blog, looks at the beer belly of America. One maps shows total number of bars, but the interesting map is the one above. Red dots represent locations where there are more bars than grocery stores, based on results from the Google Maps API. The Midwest takes their drinking seriously.
Of course there are plenty of possible explanations for the distribution. Maybe people get all their food from superstores like Walmart in the red dot areas, so there are fewer gigantic stores than there are small local bars.

Then again, the FlowingSheep guys did their homework and found, according to Census, that the number of drinking places in those red dots are really skewed compare to the average. So it's also possible that area of the country just likes to drink a lot. [More]

Update:  The comment below reminded me of this map that bounced around the blogosphere as few weeks ago: Europe's Alcohol Belts 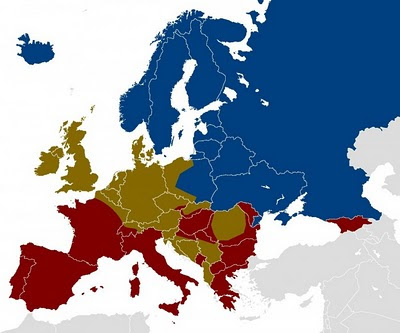 This map shows Europe dominated by three so-called ‘alcohol belts’, the northernmost one for distilled spirits, a middle one for beer and the southernmost one for wine. Each one’s existence and extension is determined by a mix of culture and agriculture.

The Wine Belt covers the southern parts of Europe, where wine has historically been an important industry and an everyday commodity: the whole of Portugal, Spain, Italy, Montenegro, Greece, Macedonia, Bulgaria, Hungary, Moldova and Georgia; all but the northwestern zone of France; and significant parts of Switzerland, the Czech Republic, Slovakia, Croatia, Serbia, and Romania. [More]

Never really thought about it before, but my home county probably does have more bars than grocery stores. There are about four grocery stores and every town has a bar, including a few that don't have a post office.

I wonder if you overlaid a map of ethnic decendency if it would parallel ethnic migration patterns from Europe? Just wondering Tim

The town I live closest to has one grocery store (or three if you count the convenience stores too) and has four bars. So I would concur with my area being a red area. I blame all of the Germans who settled this area in the 1850s for this....