Canada had no winter. At least by their standards. 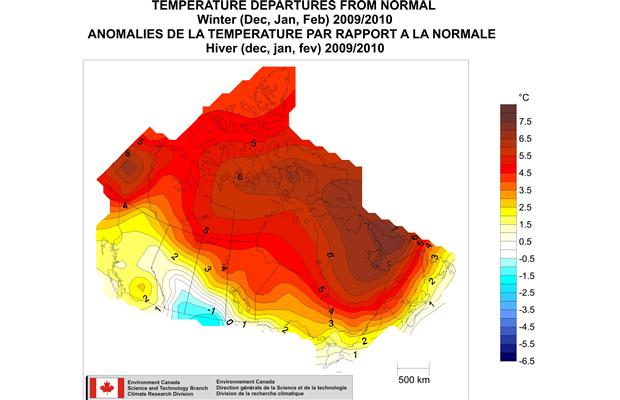 From the balmy Arctic, to the open water of the St. Lawrence and snowless western fields, this winter has been the warmest and driest in Canadian record books.
Environment Canada scientists report that winter 2009/10 was 4 C above normal, making it the warmest since nationwide records were first kept in 1948. It was also the driest winter on the 63-year record, with precipitation 22 per cent below normal nationally, and down 60 per cent in parts of Alberta, Saskatchewan and Ontario.
"It's beyond shocking," David Phillips, a senior climatologist with Environment Canada, told Canwest News Tuesday. Records have been shattered from "coast to coast to coast."
"It is truly a remarkable situation," says Phillips, noting that he's seen nothing like it in his 40 years of weather watching. He also warns that "the winter than wasn't" may have set the stage for potentially "horrific" water shortages, insect infestations and wildfires this summer.
As much of Asia, Europe and the U.S. shivered through and shovelled out of freak winter storms, Phillips says Canada was left on the sidelines.
"It's like winter was cancelled in this country," he says. [More]

You have to wonder if corn seed companies are eying the Canadian Prairies.

Also there is good article on climate change in Successful  Farming March Issue, which they may get around to posting on the their website someday.