Another shot across the bow...

As more shells are lobbed from right and left over what to cut from the budget, some interesting linkages are forming. For example, the anti-junk-food-tax lobby could be a perfect partner for no-subsidy proponents.


If you were watching the Superbowl in the DC area last night, one of the ads you saw came from the No Food Taxes coalition (which includes 7-Eleven, Alcoa, the Mid-Atlantic Petroleum Distributers Association, American Airlines, McDonald's, and many more). It showed a sensible-looking woman putting soda into her shopping cart and complaining that "some politicians" are "trying to control what we eat and drink with taxes." Pulling into the checkout lane, a deep-voiced announcer intones, "government needs to trim its budget back, and leave our grocery budgets alone." Watch the ad here.
It's evidence of how seriously the sugared drink industry takes the threat of a soda tax. And, in the interest of balance -- I did link to the ad -- here's David Leonhardt making the case for one. But a federal soda tax doesn't currently exist and, if it did, it would reduce deficits, so it's not really a great place to concentrate your energies if you want to reduce budget deficits and ensure a level-playing field in the snack foods aisle. That said, however, I'd like to propose common cause with my brothers and sisters in the Coca-Cola Company. Government does need to trim its budget back. And it probably should be doing less to influence us in the checkout lines. So let's make this the year we finally end subsidies to the corn industry. Deal? [More]

While it is hard to see serious cuts in corn subsidies when guys like Gingrich are genuflecting at the Altar of Iowa Ethanol (to the horror of many on the right), there seems to be a growing weight of concern that farm subsidies be pushed farther up the list of "Things to Cut".

In fact, the uncertainty around ethanol would skyrocket should even a minor production problem surfaces this spring and corn prices get even crazier. As it is ethanol is skating on very thin ice - barely meeting the cost of capital.


The graph below divides the price of ethanol into three components: the net cost of corn in ethanol (corn costs less distillers grains value), natural gas and other costs (see the previous paragraph) in ethanol, and the ethanol operating returns. A positive operating return does not necessarily imply profits as other costs, such as plant financing, and returns to capital, must be taken into account, but a positive operating return does signal the potential for profits in the industry. The horizontal line (at 25 cents per gallon) aims to represent the costs of capital. Profits are implied under the current set of assumptions when operating returns exceed the horizontal line. [More] 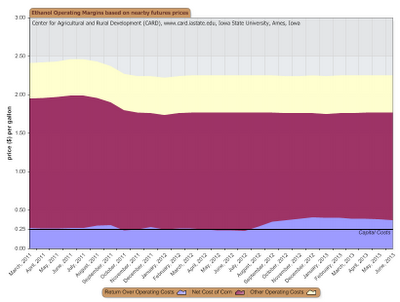 Looking at this chart, loss of any subsidy would collapse a business model already on the edge. So would substantially higher interest rates (cost of capital) or lower ethanol prices or lower DDG prices...

Meanwhile, $6 corn is beginning to show up at the meat counter. Undoubtedly, and rightfully, the protein sector will point the finger upstream. At which point, even Iowa's primary might not be enough to preserve the political subsidies.
Posted by John Phipps at 9:40 AM