Is easier said. As we watch the House struggle to actually agree on actual cuts to actual programs, instead of merely agreeing the whack billions in general, it was illuminating to me to discover cutting spending is now less popular than it was in 1980. 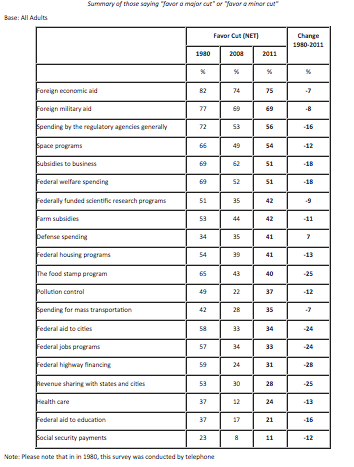 (I note with interest the trend-defying attitude about defense cuts.)


It shows that there is considerably less appetite for cutting spending today than there was in 1981. Considering how little spending actually got cut in 1981, this suggests that Republicans may have a lot less political capital to play with than they imagine. It also suggests that their strategy of front-loading spending cuts in the fiscal year 2011 is very ill-conceived. They are using up all the political capital they have for cutting spending in a way that is highly unlikely to be successful and that will not yield long-term savings. By the time they get around to doing something about entitlements, they may find that budget cutting exhaustion and frustration has set in and there is no support left for big budget cuts. It may be that they have one bite at the budget-cutting apple and they are squandering it. [More]

Bartlett certainly has a better feel for this than I do, but to me it suggests there is some confusion about the "will of the people". Getting too far in front of it can be dangerous to careers.

This result and the weakness of our economy makes me tend toward considerable skepticism about how much even the Republicans will agree to cut, let alone the whole Congress. It also makes the longshot of the "grand bargain" look like the best horse to back.


The gang of six – Coburn, Crapo and Chambliss along with Democrats Kent Conrad of North Dakota, Illinois' Dick Durbin and Mark Warner of Virginia -- have actually been meeting for months, but the episode shows how hard it will be for both sides to join hands and jump together into a public debate. If Social Security reform is the most politically radioactive issue in American politics, then overhauling Social Security, Medicare, Medicaid, defense budgets, discretionary spending and taxes all at once is akin to throwing oneself into a nuclear reactor. If you come out glowing, it's rarely in a good way.
Looming deficits will take drastic action to fix and the sacred cows, entitlements and defense chief among them, will have to be slaughtered. A successful grand bargain will require both parties to expend their combined political capital. Success promises mutual benefit, while failure ensures mutual destruction. [More]

In fact, I'm mildly optimistic after sufficient sturm und drang something will get done. It will be abused as too little/much, too fast/slow, and will be just enough to hold the the Hounds of Hell from our collective throats until another day.