This is a re-post from 10/26/2010 when Todd Neeley originally published his research on oil vs. ethanol subsidies. I just got my copy of Progressive Farmer and he ignored all counterarguments and simply arranged the answer to please his audience, I think. My conclusion below, using his numbers, still better compares the two government policies. [More here]

I have been following The Ethanol Blog by Todd Neeley as he wades through the complex maze of subsidies for ethanol and oil.  His breadth of coverage is admirable, even if his blogging style is distracting, not to mention finding your way past the subscription gates.  Here are links to the first three posts anyway: 1   2  3

My comments about the latest two installments.

Much space is given to the March study by Bruce Babcock at CARD, although irritatingly, the actual study (pdf) is not linked.  However, the report is accurately reflected and answers one of the questions I had posed about the value of the mandate (RFS).

Babcock said it would be easy to figure out the level of subsidy from RFS if VEETC wasn't there by examining the price of renewable identification numbers, or RINS. These are the numbers assigned to each gallon of renewable fuel to allow the EPA to track usage of those fuels.
Fuel blenders are required to either blend a certain amount of ethanol or to purchase those identification numbers from blender companies that have met RFS requirements and have "excess" renewable fuel to sell. The RIN system works to ensure industry-wide compliance with the RFS.
"All you would need to do would be to look at the RIN price to look at how much support is being received by the ethanol industry. But with VEETC, the RIN price is as much as 45 cents per gallon lower than what it would be," said Babcock.
With the influence of VEETC, the RFS provides little support. With VEETC removed, Babcock said, the RFS would be worth about 30 cents per gallon, or about $3.9 billion, based on the 2010 RFS of 12.95 billion gallons.
Koplow said the RFS will become more valuable every year on its way to the mandated 36 billion gallons of production in 2022. [More]

[Curiously, we have no way of knowing who this "Koplow" guy is, but I appreciate his input.  Actually he is identified in the third? fourth? post.]

This value for the mandate seems low to me, but I can find no fault in Babcock's logic other than at the extremes: low oil prices, for example.
Also the original study referenced regarding oil protection costs is here. The report does answer my speculation about the importance of Israel vs. oil.


Next, the CRS (1992) claims that the U.S. military salso is concerned with the security of Israel. But we see no evidence of a major military concern for Israel per se, independent of concern about energy security. In the first place, the Military Posture statements cited above make it clear that the JCS cares about Israel only in the context of the Arab-Israeli conflict. On account of its oil interests in the Gulf, the U.S. does want the region to be stable, and to forestall and resolve Arab-Israeli conflicts. As cited above, the Joint Chiefs of Staff are clear on this. Thus, U.S. military planners care mainly about regional stability – because of the region’s oil – and not so much about Israel per se. We believe that, if the Middle East had neither oil nor strategic importance, the U.S. would not maintain a significant military presence in the region solely to help protect Israel. Fuller and Lesser (1997) agree, stating that “at this point, Israel’s security, however important, does not represent an extra dimension of U.S. Gulf Policy” (p. 45).11 [Same]

This will come as harsh news to AIPAC, I'll bet.

However, the authors of the study warn against using their analysis to do, well, what this series is doing - numerical comparison.


Our analysis of these steps generally is illustrative, not rigorously quantitative. We estimate that there were no oil in the Persian Gulf, then U.S. combined peacetime and wartime defense expenditures could be reduced in the long run by roughly $27 to $73 billion per year (in 2004 dollars). If all motor vehicles in the U.S. did not use oil, U.S. military expenditures could be reduced by $6 to $25 billion per year, or $0.03 to $0.15 per gallon ($0.01 to $0.04 per liter) of all motor fuel. [Same]

The next installment (I think it's next, the numbering is not readily apparent) does yeoman work on summarizing all the possible "subsidies", and again the writing style is puzzling.  The data begs for columns.  Hidden in plain sight are the per-gallon totals I think more accurately reflect subsidy levels, except for one thing: they compare apples to fruit salad.

The oil industry, unlike ethanol, has more products in addition to gasoline.  To allocate all the subsidies to that one product makes no sense.  Here is what you get from a barrel of oil. 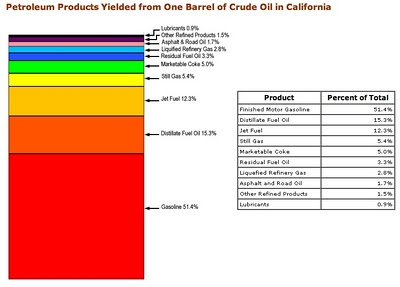 So if we use 51% as gasoline's share (allocated below), here is what the subsidy levels per gallon look like, using Todd's numbers.  I think this is fair because Todd counts home heating oil subsidies, for one example, in the mix, which don't have anything to do with the 140 B gallons of gasoline he divides by.  The last column using the energy difference between gasoline and ethanol (80%) for an energy equivalent number.

[*These labels were stupidly reversed in the original post]

It is fair to report the huge total number oil gets, but as I noted before, most farmers still believe the bigger you are the more subsidies you deserve.  And oil is a really big industry.

So for this observer, I think the idea oil is getting "more" subsidies is an artful arrangement of fact.  At the very least, oil gives the taxpayer more energy bang for his/her subsidy buck.