If it has not been made abundantly clear to farmers how they are linked to the popular uprisings exploding (and I don't think that is hyperbole) across the Mideast, let me belabor the point.

It's about commodity prices and food, as much as dictatorship.


Of course, prices rose during the Egyptian protests only to fall back as it became clear that Mr Mubarak would depart without significant civil unrest. The same thing could happen this time around. But as the popular uprising gains momentum and moves across borders, bigger issues may loom. Iran is home to a restive opposition movement—and over 10% of the world's proven oil reserves. And if China were to catch the fever for democracy? It's difficult to know how that might impact the global economy. China makes up a much larger share of global activity than it did in 1989.
Amid all the uncertainty, one thing does seem clear: events have a way of building on themselves. The combination of high unemployment and rising commodity prices has fueled dissatisfaction across the Middle East. The resulting unrest is influencing commodity prices. And that, in turn, may make life more difficult for marginal households in other countries, setting the stage for still more political upheaval.
One watches and hopes for the best. But leaders of more stable countries need to be working hard to make sure they're prepared for the economic impacts of something less than that. [More]

In short, it looks to me that the unpredicted rise in food commodities has been so abrupt and injurious to so many, that political triggers have been tripped. The corrupt political regimes there barely coped with a semi-stable global economy. They have no capability of addressing a real challenge, and that is now baldly apparent to their people. For example, they don't even have the political skill to address the public with the spin and persuasion we routinely expect.


In Sayf-Al-Islam's rambling speech last night on Libyan State television, he blamed the current unpleasantness in his country on, as near as I can determine, crazed African LSD addicts.

This isn't going down as well as Sayf had intended, and Libya seems less stable than 24 hours earlier.  Indeed, Sayf's off-the-cuff remarks managed to make Hosni Mubarak's three speeches seem like a model of professionalism, which I would not have thought was possible a week ago.
Indeed, it is striking how utterly incompetent leaders in Tunisia, Egypt, and Libya have been at managing their media message.  Speeches are announced, then never delivered on time, and then delivered with production values that woulds embarrass a public access channel in the U.S.  It's like political leaders in the region have discovered blogs just as the young people has moved on to Twitter or something.  [Er, no, that's the United States--ed.]  Oh, right.
Having just finished a week of intense media whoring, methinks that one problem is that most of these leaders have simply fallen out of practice (if they were ever in practice) at personally using the media to assuage discontent.  I've been on enough shows on enough different media platforms to appreciate that there is an art, or at least a tradecraft, to presenting a convincing message in the mediasphere.  Authoritarian leaders in the Middle East are quite adept at playing internal factions off one another.  That's a different skill set than trying to craft a coherent and compelling media message to calm street protestors no longer intimidated by internal security forces. [More]

He-Who-Must-Not-Be-Spelled provided an equally bizarre public performance last night. This is the backdrop grain traders are trying to game. Meanwhile, we are moaning about why we didn't hold onto our crops.

Thank goodness, we didn't. Like ethanol plants which will run out of $4 corn contracted in Dec 2009, the food industry is just beginning to adjust to higher input prices. This volatility takes some time to be felt, but it does impact the system. 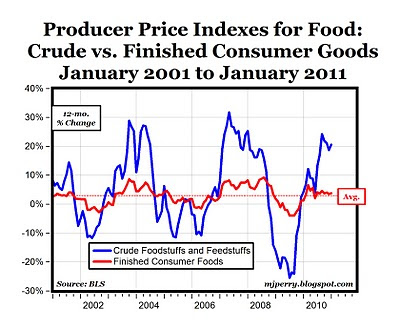 MP: Perhaps this explains some of the disconnect between all of the news reports about rising wholesale and commodity food prices globally, but no signs yet of rising consumer food inflation (1.5% CPI food inflation through December 2010).   [More]

As demand and supply (in that order, I think) of meat forces prices higher, US consumers may be some of the last to become restive about food prices. Nonetheless, I believe it will come, and the obvious targets will be ethanol and farm subsidies.

And if the protests in the Midwest are mildly successful or even sufficiently disruptive, I would not rule out food-price rallies in Washington.
Posted by John Phipps at 7:29 AM