As a submariner, I developed a lifelong antipathy to pilots, especially Navy pilots. Half-athlete and all-ego, they took arrogance as a primary virtue simply because they routinely accomplish stupefying feats of coordination and daring, such as landing on a carrier in high seas.

Underwater-nerds loathed them and their macho allure to women.

But the military of the future won't need these glamorous heroes very much, and when they do go aloft, their risks will be much worse than usual. To begin with, we're rapidly switching expensive fighters for cheap drones "piloted" by gamers is a basement somewhere.


The recent meteoric rise of UAV development, highlights an issue of the growing importance of UAVs in the future and leads to the corollary issue of whether UAVs will replace manned aircraft’s roles and missions.  The bottom line is that the Services still need an organic capability for a continuous, on-demand, all-weather platform to provide intelligence on the battlefield. In addition, the Services must execute these operations quickly, safely, and cheaply.  As such, UAVs may be a significant part of the answer since they have proven their combat mettle in Operations DESERT SHIELD, DESERT STORM, and now Bosnia.  Once a strike capability is fielded, then the manned aircraft community will be really threatened.  UAVs will continue to replace manned aircraft in many areas, but only time and technology will tell how much. [More]

Even when we do need full-sized planes, they won't need jockeys either. 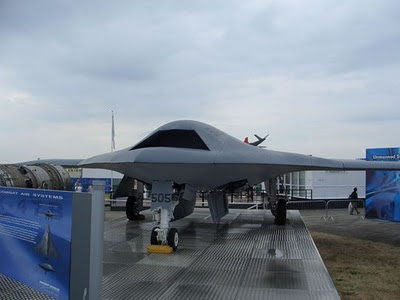 The X-47B is a unmanned fighter sized aircraft developed by U.S. firm, Northrop Grumman. The vehicle is just a test bed but is hoped will lead to an eventual unmanned fighter aircraft. The past decade has seen a dramatic increase in the use of UAV’s (Unmanned Aerial Vehicles) but thus far most UAV’s have been fairly primitive and used priarily only for recon or light strike support. Nothing designed thus far has really had the ability or purpose to replaced manned aircraft. The X-47B is a prototype which if successful will lead to the eventual replacement of manned aircraft in the United States Navy. [More]

But the real coup de grace will be the weapons they are up against. Dogfights with laser defenders aren't really movie-ready drama - they're split second target practice. And that very real possibility just became more possible.


Translated from the Nerd: Thanks to Hernandez, the Navy will now have a more powerful death ray aboard a future ship sooner than expected, in order to burn incoming missiles out of the sky or zap through an enemy vessel's hull.
"Five hundred [kilovolts] has been the project goal for a long time," says George Neil, the FEL associate director at Jefferson Labs, whose Rav 4 license plate reads LASRMAN. "The injector area is one of the critical areas" of the whole project.
The free-electron laser is one of the Navy's highest-priority weapons programs, and it's not hard to see why. "We're fast approaching the limits of our ability to hit manoeuvring pieces of metal in the sky with other maneuvering pieces of metal," says Rear Adm. Nevin Carr, the Navy's chief of research. The next level: "fighting at the speed of light and hypersonics" -- that is, the free-electron laser and the Navy's Mach-8 electromagnetic rail gun.
Say goodbye to an adversary's anti-ship missiles, and prepare to fire bullets from 200 miles away, far from shoreline defences. No wonder the Navy asked Congress to double its budget for directed-energy weapons this week to $60 million, most of which will go to the free-electron laser.
It won't be until the 2020s, Carr estimates, that a free-electron laser will be mounted on a ship. (Same goes for the rail gun.) Right now, the free-electron laser produces a 14-kilowatt beam. It needs to get to 100 kilowatts to be viable to defend a ship, the Navy thinks. But what happened at Jefferson Labs Friday shrinks the time necessary to get to 100 kilowatts and expands the lethality of the laser. Here's why.
All lasers start off as atoms that get agitated into becoming photons, light that's focused through some kind of medium, like chemicals or crystals, into a beam operating on a particular wavelength. But the free-electron laser is unique: It doesn't use a medium, just supercharged electrons run through a racetrack of superconductors and magnets -- an accelerator, to be technical -- until it produces a beam that can operate on multiple wavelengths.
That means the beam from the free-electron laser won't lose potency as it runs through all the crud in ocean air, because its operators will be able to adjust its wavelengths to compensate. And if you want to make it more powerful, all you need to do is add electrons.
But to add electrons, you need to inject pressure into your power source, so the electrons shake out and run through the racetrack. That's done through a gun called an injector. In the basement of a building in Jefferson Labs, a 240-foot racetrack uses a 300-kilovolt injector to pressurize the electrons out of 200 kilowatts of power and send them shooting through the accelerator.
Currently, the free-electron laser project produces the most-powerful beam in the world, able to cut through 20 feet of steel per second. If it gets up to its ultimate goal, of generating a megawatt's worth of laser power, it'll be able to burn through 2,000 feet of steel per second. Just add electrons. [More]

Pilots will not release their grip on the stick easily. The Navy is top-heavy with ex-pilots at the flag rank, and their community is pretty solid. And this labor demand problem is even more troublesome to the USAF. But sooner or later the lack of rides and the problem of defense budgets will make them quaint reminders of how Grandpa used to fight wars.

Presumably this is 20 linear feet of cut, but how thick of steel? 1"? Curious minds demand to know.

I didn't read it that way. It's way more exciting to think of the laser going 20' INTO steel, no?

Lemme see what I can find out.