Make it a crop. Amaranth is showing up in the grocery stores in "ancient breads".


The idea of making modern bread out of old-style grains isn't new. For decades, Glendale-based Food for Life has been making Ezekiel 4:9 Bread, inspired by the list of grains in the Bible passage for which the bread is named; the bread contains wheat, barley, rye, oats, millet, corn and rice.

Newer products assert that they're made with grains that "are true to their original form," as Trader Joe's Ancient Grain Bread (made with quinoa, oats, amaranth, Kamut, millet, teff and barley) states on its label.
The ancient grains — confusingly — are not all grains. Grains are technically grasses. By that standard, Kamut, spelt and wheat are all grains, but quinoa and amaranth are not. Still, the common term "grain" has stuck for all of them.
"Grains" such as quinoa, amaranth, spelt and Kamut are called "ancient" because they've been around, unchanged, for millennia. By contrast, corn, rice and modern varieties of wheat (such as hard white wheat and hard red spring wheat) have been bred selectively over thousands of years to look and taste much different from their distant ancestors, said Mian Riaz, director of the Food Protein Research and Development Center at Texas A&M University. Modern corn, for example, bears little resemblance to wild corn from long ago.
However, the fact that they're little changed from antiquity doesn't necessarily make the ancient grains more nutritious than modern ones, said Joanne Slavin, professor of food science and nutrition at the University of Minnesota. [More]

Yes, that amaranth. I think.


Amaranth has been cultivated as a grain for 8,000 years. [1] The yield of grain amaranth is comparable to rice or maize. It was a staple food of the Aztecs, and was used as an integral part of Aztec religious ceremonies. The cultivation of amaranth was banned by the conquistadores upon their conquest of the Aztec nation. Because the plant has continued to grow as a weed since that time, its genetic base has been largely maintained. Research on grain amaranth began in the US in the 1970s. By the end of the 1970s, a few thousand acres were being cultivated.[2] Much of the grain currently grown is sold in health food shops.
Grain amaranth is also grown as a food crop in limited amounts in Mexico, where it is used to make a candy called alegría (Spanish for happiness) at festival times. The grain is popped and mixed with honey. In Maharashtra state of India, it is called 'Rajgira' राजगीराjaggery in proper proportion to make iron and energy rich 'laddus,' a popular food provided at the Mid-day Meal Program in municipal schools. in the marathi language. The popped grain is mixed with melted
Amaranth grain can also be used to extract amaranth oil - a particularly valued pressed seed oil with many commercial uses. [More]

This reminds me of the Jerusalem artichoke (BTW. it is neither) scam way back in the '80s. It took some time to get rid of those residual populations, I can tell ya. I'm trying to imagine what kind of rotation you would use - especially for the crop immediately after.  Nor can I remember seeing amaranth settings for my combine. 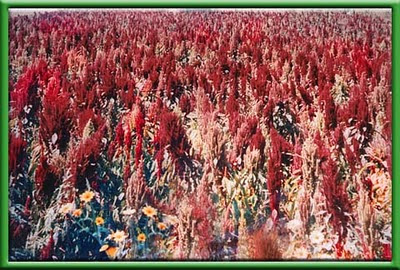 [Source]
Is this stuff much different from the loathsome pigweed of glyphosate resistance fame?  I don't remember the bright red color shown above, but maybe it never really ripened.


Now let’s look at the vilified pigweed for a minute. First the name, ‘pigweed’, makes it an easy target for demonizing. Who could possibly appreciate something so base as ‘pig’ and ‘weed’ combined?
Before we go any further, I would like to state the true and dignified name of pigweed: it is used to refer to several wild species of the genus Amarantus. The word comes from the Greek amarantos and means the “one that does not wither,” or “never-fading”.
This plant family includes a wide variety of species, some of which are cultivated for their nutritious leaves (oft-compared to spinach), others for their grain (which is actually a pseudo grain or seed). Various wild species of amaranth are saddled with the label pigweed, particularly in North America, and several of those now feature on the list of the world’s weeds that have developed a resistance to glyphosate.
(Apparently, the weedy types are also edible and taste much like the cultivated kinds. They simply don’t grow as large or produce as many leaves or seeds.)
The ‘never fading’ aspect therefore seems not just refer to the flower — which indeed keeps its deep reddish or rust color for a long time — but it also aptly applies to the sheer tenacity of the plant itself. It flourishes in a large variety of soils (from acidic to alkaline) and climates (from hot to cold); wild amaranth comes back without being planted; it grows in dry conditions; and some species thrive even in fields treated with glysophate — never fading. [More]

I suppose this stuff could catch on, perhaps in marginal areas. Or places with uncontrollable populations. Looks like a "Plan B" to me!


Amaranth grain can be popped, flaked, or ground into a high-protein flour. Currently in the U.S., more than 40 products contain amaranth grain in one form or another. The crop is well adapted to the midwestern and western U.S. It is drought tolerant and is best planted during late spring. Since the seeds are very tiny, some growers use insecticide boxes on their drills or planters to plant amaranth. Others use a vegetable seeder. The grain is harvested with a combine. Typical yields from amaranth range from 600 to 1,200 pounds per acre. [More]

I wonder what the weed control plan would be?

Another odd point: don't feed it to chickens.
Posted by John Phipps at 8:16 AM