Jeez - the Australians in Queensland can't get seem to find the end of the tunnel.  Or storm.


Still cleaning up from devastating floods that killed some 32 people, residents along a wide swath of Queensland’s north coast are now being told to brace themselves for what may become the largest cyclone the “sunshine state” has ever faced.
Cyclone Yasi is expected to slam into the Queensland coast around 1 a.m. Thursday local time, packing winds of more than 250 k.p.h. (155 m.p.h.). This puts it on a par with the force of Hurricane Katrina, which devastated New Orleans in 2005 and clocked winds of 175 m.p.h., before weakening as it neared the coast.
...
Yasi is also threatening around a third of Queensland’s sugar cane crop. Australia is the third largest sugar exporter in the world and Queensland grows more than 90 percent of the country’s sugar cane. The state’s banana crop, another major earner, is also expected to be severely impacted. This latest hit comes as Queenslanders clean up from floods that have caused some $5.6 billion in damage. [More]

For me there is something terribly wrong about center pivot fields underwater. 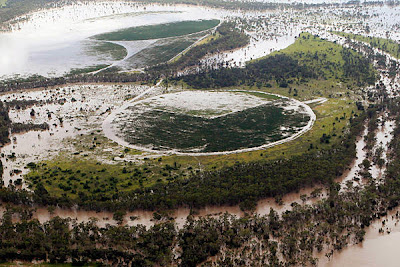 OK. Now imagine you are a Chinese government official and you source food supplies for your increasingly wealthy and expectant citizens. One of your best sources can't get out from under clouds (Australia) , another came up short on their corn crop (US) and the rest are fighting La Nina-related production problems.
Now you turn on TV and see popular uprisings triggered in large part by people who want cheaper and better food, and expect their government to make it happen.
I would do three things:
Posted by John Phipps at 9:18 AM