One of the ironies of our farm policy and the folk-economics of our profession is the enduring belief that farmers leave the profession because of low prices. Like all seemingly obvious observations, it is simple to grasp and easy to equate to low pay for employees. But that may not be the largest factor. Not even on the other side of the world. 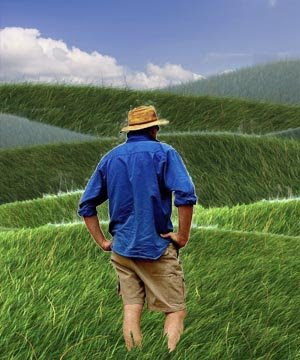 It's not because of threats to the farm business far from it. Farms are getting bigger and their ownership is consolidating among a shrinking number of major players.

The trend towards mega-farms is already creating some huge, farm-based business empires and attracting the attention of corporate investors keen to taste some cream from the dairy industry's profits.

The biggest dairy farm businesses, such as those controlled by Fonterra director Colin Armer and Timaru-based accountant Allan Hubbard, own thousands of hectares of prime dairy land around the country and are likely to have annual revenues approaching $100 million, placing them among the ranks of this country's biggest businesses.

Consolidation of farm ownership in fewer hands has been happening for many years but is gathering pace as high dairy prices help push up the value of land and smaller farmers decide to sell their family farms to their bigger and more prosperous neighbours.

The result for the dairy industry is that the big are getting bigger and the small players are leaving.

"I think this is a general business trend. The businesses need to grow and their scale gets bigger and bigger."

Fonterra processes about 95% of the milk produced in this country and the trend shows up in the shrinking number of its farmer shareholders, even as the volume of milk it is processing continues to increase.

It has been my experience that our farm policy does little to help smaller producers stay in the business, and given the example above in New Zealand, our farm policy is producing the same results as virtually no policy. The Kiwis don't subsidize their agriculture.

The recent passage of the much-maligned new farm bill will continue to provide evidence of this failure. By sending subsidies regardless of size or wealth, no shelter from consolidation is built in.

This is not necessarily a bad thing, but it is far from the policy advertised and we could have gotten the same result for little or no taxpayer money, as NZ demonstrates.

[Is it me, or does the picture look photoshopped? That is the strangest topography I've ever seen in a pasture, but then again, it's one reason I would love to visit New Zealand.]
Posted by John Phipps at 6:14 AM

Hi from New Zealand. Yes, I'm afraid that pic has been photoshopped. Even New Zealand is not that manicured. The pic was noted as digitally enhanced in the Sunday Star Times newspaper in which it ran with that story. I do agree that the US could save a lot of money by axing the farm bill. What are the figures? Eighty per cent of subsidies going to five per cent of farmers, and they the US's richest and often corporate farmers? John, you would be most welcome to visit NZ and see life without subsidies first hand. Meantime, you might like to keep up with farm news here http://www.ruralnetwork.co.nz

Do you even understand the definition of SUBSIDY. A subsidy is supposed to artificially encourage production of a specified commodity irrespective of who is growing it. What you keep hoping for and eluding to is WELFARE.