A new problem with the farm bill... 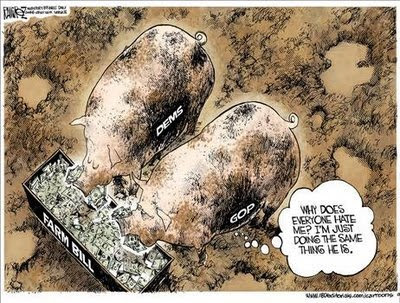 If you are a Republican, anyway. If McCain carries the rural subsidy-absorbing states where legislators tremble at the idea of NOT voting for such pork-laden entitlements, what does that say about the importance of this issue compared to the real problems many in those states worry about: jobs, immigration, the war, gas prices, etc.? Sen. McCain has been "talking straightly" about farm subsidies.

John McCain opposed the farm bill. In an impassioned speech on Monday, he declared: “It would be hard to find any single bill that better sums up why so many Americans in both parties are so disappointed in the conduct of their government, and at times so disgusted by it.”

McCain has been in Congress for decades, but he has remained a national rather than a parochial politician. The main axis in his mind is not between Republican and Democrat. It’s between narrow interest and patriotic service. And so it is characteristic that he would oppose a bill that benefits the particular at the expense of the general.

In fact, in this issue, McCain may have found a theme to unify his so far scattershot campaign. He has always been an awkward ideological warrior. In any case, this year may not be the best year for Republicans to launch a right versus left crusade. But McCain has infinitely better grounds than Obama to run as a do-what-it-takes reformer. [More]

Given the scorching rhetoric and general condemnation of the farm bill here and around the world, defending this vote will be a labor of reluctance for GOP members.

The recent farm bill was a $300 billion, subsidy-laden grab bag of handouts to special interests. Mr. Boehner railed against the legislation on the House floor, urging GOP members to vote against it. The bill passed by a huge margin with the help of 100 Republicans. President Bush vetoed it, and the House promptly overrode the veto. "I wouldn't describe the farm bill we're voting on as change," he told me in something of an understatement. "As I said on the floor, we can do better."

Perhaps that's why Mr. Boehner has recently switched from cajoling to trying to use the GOP's recent misfortunes to scare Republicans out of their torpor. Some in his party are already marking down the special election losses in conservative districts in Illinois, Louisiana and Mississippi to lack of money, bad candidates and a poor message. Mr. Boehner is painting the defeats as "real wake-up calls" and warning members to think hard: "Every race is different, and there are a lot of reasons why those three races were lost. But it is clear that the American people are anxious for change. . . . and Republicans have to show we can be ready to deliver it." [More]

And if crop progress continues to sputter and grain - and worse yet, - food prices are even higher by November, and red states still vote red for President, I think a light will dawn on many that future farm program votes are not sacrosanct must-deliver issues, even for the most rural districts.

I know if it were not for his intractability on Iraq (which seems to be undergoing "re-messaging"), this issue would sway my vote for McCain to enable this scenario. Unfortunately too, I'm in downstate Illinois - a place with no political oomph whatsoever.

The farm bill passage battle may be over. Living with the victory may squander all the public support agriculture has acquired over previous generations of responsible self-reliance. And in the process rewrite some political dogma for the right.

Hey Mr. John, the cartoon is Great!! Sometimes they may be at different troughs, but the diet will be the same.
A thought occurred to me about the soap-opera that is the Farm Bill. Congress sent it to the President, incomplete and he vetoed it. Then Congress overrode the veto of the incomplete Bill. They made it Law. They intend to send the missing Title to the President to pass or veto. Here's the thought- If the President signs the missing Title would this not open the door for a "Line Item Veto" of future Bills?? After all, Congress by doing this is giving him the ability, or setting the foundation for it. Whadda ya think ???
Funny how a tiller will get ya to thinking!??!