User comments from a "Vista" sprayer... 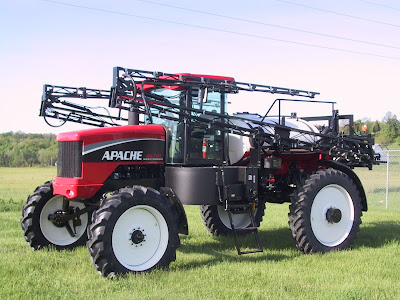 Just like I finally realized Vista was a magnificent dog, so too I have realized my upgrade to the newer Apache sprayer was a similar poor choice.

Gentle reader, don't go there. Somehow the good people at ETI have managed to screw up a good machine and foist it upon hapless buyers as an improvement. I have waited until I had several days of operation, and the diligent attention of my salesman before posting this, but it's time to call this a fiasco.

To begin with, my old sprayer had the same JD engine and an 850 gallon tank. It handled the load OK, but when spraying beans planted on chiseled ground, you would have to switch to a lower gear in wet spots. The new machine, however, decides for you when it is time or appropriate to shift. The shifter senses velocity and RPM, and coupled with the torque converters, manages to make the machine as lethargic as possible.

Not to be outdone, the engineers who designed the controls obviously had never sprayed a field in their life. The main propulsion control is as unintuitive as the Electoral College - and with much the same result.

The old machine control was similar to a combine propulsion control lever, but who wants to use standardized controls? Instead, you are gripping a joystick with multiple, similar buttons that (wait for it) increases motor RPM by forward motion - not forward position. In other words, the joystick isn't a throttle, it's a whip. This thunderingly stupid operator interface is extremely difficult to adapt to, and it gets even worse.

To reverse, the old machine had an idiosyncratic movement: a "U" - reverse was the right side of the "U". After a few passes I adapted, unlike combines with a Forward = Forward; Backwards = Backwards control lever. The new Apaches, however, invent their own rules.

First, you have to hold a joystick button constantly to travel in reverse. But be careful, if you accidentally hit that button - one of 8 on the joystick - the transmission shifts into neutral. Surprise!! And as for shifting into forward, don't even think about it until the RPM is below 1400. It will just ignore you. Shifting "on the go" as most farmers know it from tractors is similarly regimented.

But wait - there's more. RPM overrides prevent engaging unless conditions are approved by the machine. The result: lost minutes in the corners of fields trying to get the damn machine to move.

I know what you're thinking: Old John has lost it in his dotage. Fair enough. But it took me about 10 minutes to become comfortable with the old Apache and I'm at 5 days and counting with this one.

The last straw was when I complained about how underpowered the machine seemed compared to my old one. The tech rep pointed out that because the tank was smaller (750 gallons versus 850 gallons) they turned the engine down 15 HP! The same engine! I mean, after all, how can you sell the big ones if the smaller machines work adequately?

Bottom line: like my experience with Windows Vista, this Apache upgrade has proven to be a bust. Maybe I'm the only troglodyte who can't appreciate their weird control system, but I'm also the dope who paid them 6 figures for a sprayer that a person who previously drove a nuclear sub can't handle easily.

Bad engineering deserves criticism. I think the 2008 Farm Bill made that clear. I have praised my old Apache in public for free, so consider this another straight opinion.
Posted by John Phipps at 6:34 PM

Email ThisBlogThis!Share to TwitterShare to FacebookShare to Pinterest
Labels: production

Sounds like you need to play more video games.. After all isn't that how most things are engineered today?? Like autos, those brainy folks may be good at the computer with their designs and knowledge of all that is electronic..but can they make it go or work on it??
Perhaps they should develop a video game that you can play to help with the learning curve?? Sounds like you paid more for trouble than performance.

It just blows my mind that people will spend 100k for anything without demo-ing it. That seems like a pretty expensive mistake to me

Touche. You are absolutely right. My error was thinking the difference would be the cab, and the controls would be a short adaptation curve. The rest of the sprayer was just like my old one with some improvements - heavier boom, better pump, etc.

But a demo drive would have helped prevent this bad decision. Although, I did the same thing with Vista...

I think you feel comfortable with ver. 2.0 as opposed to a whole new machine.

John, I am just a member of an allied industry and sometimes I am just floored by the decisions farmer's make without really thinking them through. For example, "Dad always said keep the pens full so we always buy more cattle." I know what kind of deliberations I go through to buy a $15,000 vehicle every couple of years and I can understand how you would assume that the sprayer would be similar to your earlier model, it just amazes us small folk who don't handle thoses kind of dollars on a daily basis.

Since nate started it, I'll jump on too. You probably should have unloaded that sprayer before broadcasting worldwide (web, that is) what a dog it is.

On the other hand, if your upside is really more in blogging than farming, perhaps establishing cred as a straight talker will pay larger dividends than the sprayer will cost you.

Oh, and one other thought. If Cargill doesn't sue you for publicly questioning their solvency, etc., maybe you'll get a second chance from the sprayer manufacturer for disparaging their product. :)

Post a query to other's that have identical machines, to see if they are having the same difficulties. Document them and send them to the manufacturer. Ask if this is a problem to which there is a solution or not. Then take your arsenal of tools in your pocket protector and some from the garage and fix it your self. Then sell them the technology on how to override, bypass or eliminate the problem.
After all you want it to be able to work for most everyone, with your son there now. But then again you may want the grand-kids to operate, they are more adept to video games.
But if all else faails...get a B-D-H-!!!!!

I am really impressed with your blog article, such great & useful knowledge you mentioned here.Your post is very informative. I have read all your posts and all are very informative. Thanks for sharing and keep it up like this.