How embarrassing is this?... 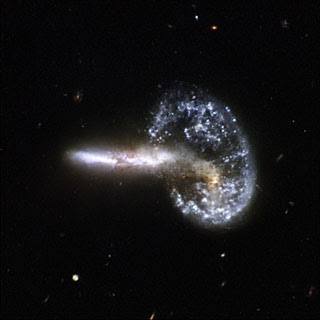 Arp 148 is the staggering aftermath of an encounter between two galaxies, resulting in a ring-shaped galaxy and a long-tailed companion. The collision between the two parent galaxies produced a shockwave effect that first drew matter into the centre and then caused it to propagate outwards in a ring. The elongated companion perpendicular to the ring suggests that Arp 148 is a unique snapshot of an ongoing collision. Infrared observations reveal a strong obscuration region that appears as a dark dust lane across the nucleus in optical light. [More]

Don't they have turn signals? Or maybe they come from Florida.
Posted by John Phipps at 5:53 PM