Trying for another successful landing...

We're not the only folks trying to arrive without a disaster. Tomorrow evening, NASA' s Phoenix Lander brings it home to the Red Planet. 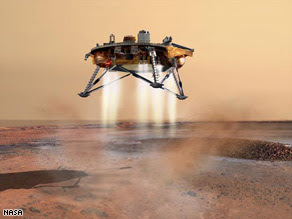 But first, they have to get the lander on the ground, and that's where the worry comes in. In fact, they have a name for it in the Mars exploration community: "seven minutes of terror."

Seven minutes is all it takes for a spacecraft travelling neary 13,000 miles per hour to hit the Martian atmosphere, slam on the brakes and reach the ground.

During that time, onboard computers will be working at a manic pace as the spacecraft deploys its parachute, jettisons its heat shield, extends its three legs, releases the parachute and finally fires its thrusters to bring it down for a soft landing. Hopefully.

"Everything has to go right," NASA Associate Administrator Ed Weiler said. "You can't afford any failures."

It's risky business. Historically, 55 percent of Mars missions have ended in failure. And tensions will be particularly high with the Phoenix spacecraft. [More]

The central mission is the discovery of organic matter near the polar regions of Mars, and with it the very real possibility life is more common than we think. This is my great hope: to escape the human-centric vision of the universe that overstates our importance and prevents us from seeing our species as anything but the pinnacle of life.

To get as worked up as I am about this amazing effort, watch this really cool video from NASA.
Posted by John Phipps at 5:56 AM