Do we know what happened Thursday?...

The lightning drop and rebound in the DJIA still boggles the mind in retrospect.  Jeez- just look at it: 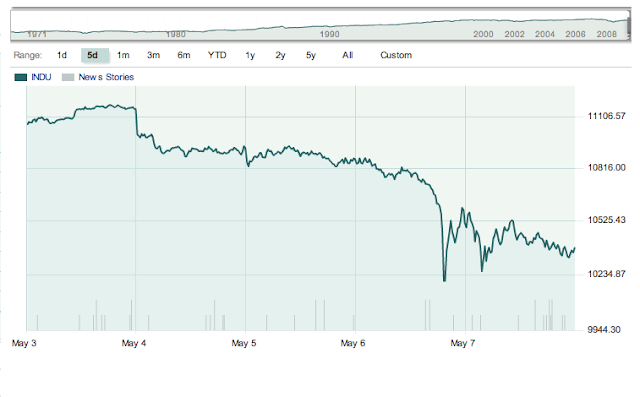 For the most part we're getting lists of possible causes, although market watchers are starting to center in on high frequency trading (HFT).


In principle, more trading and faster trading should be a good thing, making markets more liquid, allowing them to react to new information more quickly, etc. The problem is that the way trading has gotten quicker is by relying more and more on computers, which in turn means that many (perhaps most) trades are based not on fundamentals—which is what you want investors to be looking at—but on price movements. In normal times, this doesn’t matter much—the price movements are reasonably random and therefore the computerized trading doesn’t move the market in one direction or the other. But when things go wrong, you can get immense moves up or down. That’s why, in contrast to Felix Salmon, I don’t think yesterday’s crash is evidence the market is irrational. It’s more that it’s a-rational: the computers aren’t panicking or herding. They’re just following simple rules. I think this is bad for the collective intelligence of the market, which really depends on diversity of thought and independence of action. But what happened yesterday isn’t, I think, quite the same as the crash of 1929 or the stock-market bubble of the late nineteen-nineties. It’s an example of the dangers of a-rationality (to coin a word) rather than irrationality.[More]

Another contributor could be fragmentation of the market, which is better explained by somebody who knows something about it. The best graphic I found is here. 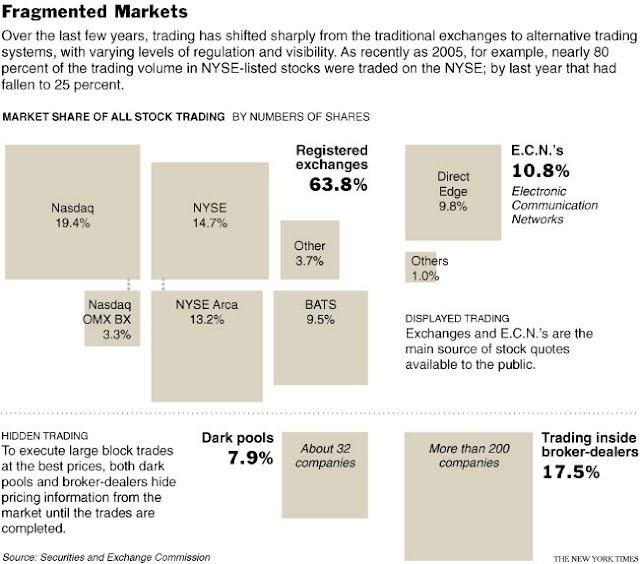 More remarkable to me than the composite drop in the DJ Index was the performance of some individual stocks:

[Source]
So just imagine you had an order in place to buy Excelon at $1. The price briefly hit ZERO, so if your computer was fast enough, you could make the fastest 40X since Jesse James.  I don't know if this was actually possible - especially since some trades were canceled - but I wonder if these gyrations have prompted a bunch of waaaaaay-below-market orders to be entered in case another transient occurs.

Perversely much of the efficiency of the market also provides its fragility. We may be pushing the point where the benefits of having money whiz around the globe is offset by the growing risk of events that were formerly much less likely.


Exchange officials are still trying to puzzle out what exactly happened to cause the price of dozens of stocks to suddenly plummet by more than 60%. But it seems likely that it has something to do with the new infrastructure of high-frequency trading that now accounts for the bulk of stock market activity.
To function well, stock exchanges need market makers — that is, firms that are willing to keep buying and selling in a particular stock at all times. On the New York Stock Exchange these are the "specialists" (who are now kept around mainly as backdrop for CNBC reporters). On Nasdaq they are simply called market makers. They make money off the difference between what they bought and sold a stock for (the spread). Over the past decade, though, spreads have shrunk as traditional market makers have been pushed aside by high-frequency trading firms that take advantage of millisecond-by-millisecond price changes and the tiny premiums that exchanges pay to "liquidity providers" (a.k.a. market makers) to make money even at infinitesimal spreads.
At one level this is much more efficient than the old system. The spreads are smaller, so investors are getting a better deal, right? Well, not if the system also becomes much more fragile, and susceptible to sudden collapses. Over the past three decades our financial system has become vastly more complex in terms of technology and diversity of available financial products. By some measures it has become more efficient — trading commissions have certainly come down. But it has also become more prone to crisis and (maybe) collapse. Efficiency (and this is an argument borrowed from Taleb) breeds fragility. [More]

But strangely enough, the bond market hung in there - and that has some powerful reassurance for increasingly impatient inflation worriers.


You probably know the bad news already. Stocks on Thursday dropped 600 points in 15 minutes in mid-afternoon. The market went down nearly 1000 points before rebounding. That's the worst mid-day drop in the Dow Jones industrial average EVER. So really bad stuff. But here's the good news: Bond prices were up. During the hysteria, the yield on the 10-year Treasury Bond, which falls as prices rise, dropped to 3.25%. The 2-year US bond went down to as low as 0.60%. That's really good news. Here's why:
Bond yields, among other things, are a function of how likely it is that investors think you are going to default, or not pay them back. That's why a subprime borrow pays more on his home loan than someone with a high credit score. The same is true for countries. So the fact that bond prices in US fell when the stock market fell means that at least so far the global economic problems have not impacted how risky people think the overall US economic system is. Confidence, that all important economic currency, is still something we trade in. That's good. [More]

Other than curiosity, does this Wall Street hiccup merit any attention from those of us invested largely in commodities? I think so.

First, we have dealt another blow to investor confidence in the equity markets. Folks weren't jumping into bonds because they wanted to make big bucks, they were fleeing risk. The fact the cause has not been definitely identified and preventative measures outlined is not calming either. Scared money needs more risk premium. So one possible result could be higher priced derivatives, and I think that could flow over into commodity options - the current rage for farm marketing mavens.

Frankly, I think commodity options in general are too expensive now. Either contagious risk-aversion or added demand from new investors could raise the cost for producers to "protect" their crop to the point the protection captures much if not all the profit.

Second, many think this little roller-coaster ride added momentum to financial regulation.  I support most of the measures in the bill under debate, but understand clearly regulation is an economic deadweight, which will again raise the cost of marketing - even if we simply sell cash contracts by raising hedging costs for our trading partners.

Finally, this mini-debacle could see a new tax regime on trading- especially HFT - both to act as a brake, and to raise some badly needed new revenue for the government.


There’s a very sensible idea going around that a simple way to deal with nearly all of these problems, at a single stroke, would be to implement a tiny tax on financial transactions. Historically, people have complained that such a tax harms liquidity, which is true. But the fact is that it harms the bad kind of liquidity — the liquidity which dries up to zero just when you need it most. Liquidity, if it’s spread across multiple electronic exchanges and can disappear in a microsecond, does very little actual good, and in fact does harm during tail events like this. Let’s tax it, and raise some money for the public fisc at the same time as slowing down markets and making them think before doing a trade. [More]

Since I am convinced we have to raise revenues (taxes) to attack the deficit, this looks like a win-win idea to me.

Most surprising to many of us, our commodity markets didn't overreact.  Either all those linkages to Wall Street, oil, and the dollar are suddenly weakening, or maybe there really are some fundamentals lurking in the bushes that prove more demand than we think.  It's worth considering.

So, all in all, for farmers this was a more interesting event than we may suspect.  Depending on its half-life, I think it is good news for both prices and interest rates.
Posted by John Phipps at 10:18 AM