Like many other Commodity Classic attendees, I winced when I heard about the flooding damage at the Opryland Hotel in Nashville. 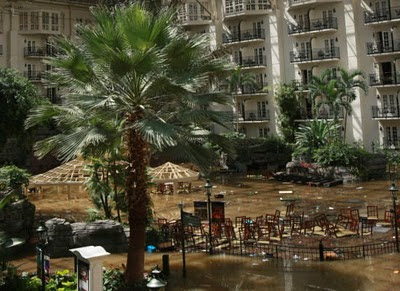 [Source]  (I had some great conversations/refreshments under those gazebo structures.)

I can remember the labyrinthine corridors and the beautiful open areas where the restaurants were.  Of course, this sad occurrence scarcely made news as the US focused on the oil spill in the Gulf.

One common denominator between the two events is they both could occur again.

Only one is far more likely, I think.


For the sake of completeness, for those who haven’t read my recent posts on this subject — such as “Northeast hit by record global-warming-type deluge” and “Global warming means local (super) storming” — here’s some more background on the link between global warming and extreme precipitation.  Regular readers can skip the rest of this post.  You can find more here and there’s some terrific technical meteorological analysis here.
In 2004, the Journal of Hydrometeorology published an analysis by NOAA’s National Climatic Data Center that found “Over the contiguous United States, precipitation, temperature, streamflow, and heavy and very heavy precipitation have increased during the twentieth century.”
They found (here) that over the course of the 20th century, the “Cold season (October through April),” saw a 16% increase in “heavy” precipitation events (roughly greater than 2 inches [when it comes as rain] in one day), and a 25% increase in “very heavy” precipitation events (roughly greater than 4 inches in one day)– and a 36% rise in “extreme” precipitation events (those in the 99.9% percentile — 1 in 1000 events). This rise in extreme precipitation is precisely what is predicted by global warming models in the scientific literature. [More]

I have already decided to stand with the AGW "alarmists" but I really don't don't want to push my view on others. In fact, I'm starting to view this as the same kind of competitive advantage no-tillers often argue. After a few more Atlanta/DC/Nashville precipitation events, there may be a shift in interest.

I think my part of the country is in for more and larger rain events, which is really bad news for poorly drained flat ground like ours. So all our excess capital (yuk!) is going to drainage, storage, and drying. While I could be wrong and suffer some economic disadvantage, if I am right  - well, if the consensus of climate  models are right - my ground could be better prepared for a markedly different growing climate.
Posted by John Phipps at 6:17 PM

Yup you are right about this and over time as the evidence accumulates only the stubborn and truly ignorant will refuse to acknowledge what all can see with their own eyes. All in due time but meanwhile let them rant and rave. It is typical human behavior.

In my local metroplex we have been developing the "river-front" for the last 7-8 years and every couple of years the local fishwrap runs a story on flooding issues and what would happen...don't matter, people keep spending money down there. The Opry House was built in 1974(?) and the hotel a couple of years later...so yeah, this hasn't happend before and makes us question global warming critics.

We just wen't through a horrible winter here and it still wasn't the worst on record. In addition, who knows how well records were kept back in the 1850s, 1900s, etc. What if Ol' Joe was too busy moving his things to higher ground in 1905 to record the rainfall amounts and got to that a couple of days later after the disaster has subsided?

Bottom line...we don't know and can only hedge our bets. I agree with the tiling, but that will pay back (even in not so wet years...) and in the meantime we are building our livestock barns for any conceivable event (heat, cold, wind, etc.) I don't feel stubborn or ignorant, just curious about the next challenge that we'll face.