It is all very well to carp and whine about what others are saying about our federal deficit problem, but sooner or later, folks like me have to demonstrate what we would do if we were kings. I had a vague idea about what budget cuts and new taxes(you heard me) I would order, but no good way (or at least easy way) to calculate the effect of my wise and beneficent rulings.

Seriously, take a few minutes and wander through the choices to get an idea of what helps and hurts the most.  I got to the goal and then some, but probably should have spent more time analyzing each item.  My results: 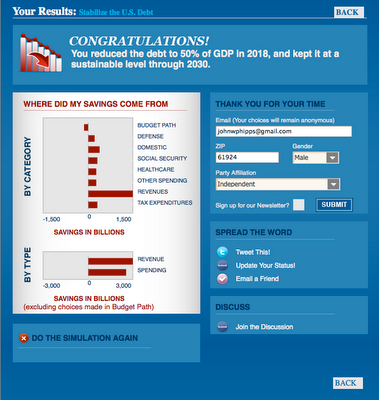 But time may be shorter than even pessimists think. Bruce Bartlett starts the countdown, which he thinks hinges on ratings agencies.


What might trigger such a downgrade? The rating agencies have already told us what it will be: a rise in the federal government's interest payments to 20% of revenue, not spending. That is the limit of what the agencies view as acceptable. As noted earlier, given the status of federal interest payments as superior to all other spending, this is the logical position for the rating agencies to take. Whether they are right about 20% of revenue being the cutoff between manageable and unmanageable interest payments is an empirical question that their experience presumably informs.
So when might we reach the 20% threshold? According to the Congressional Budget Office's forecast based on the administration's budget, that will come in about 10 years. Interest as a share of projected revenues will rise from 8.9% last year to 9.9% this year, 14.8% by 2015, 19.8% in 2019 and 20.8% in 2020. [More]

Although the recovery and unemployment are still the foremost concern, getting some ideas about how to reduce the deficit is clearly the most pressing need of government. At least being able to talk coherently about the numbers will require some homework, to say the least.

Feel free to share your plan.
Posted by John Phipps at 5:52 PM

John, Thank you for sharing this budget simulator. Figured I'd share the following letter I sent to my representative here in Missouri:

Thank you for responding to my email to Congressman Luetkemeyer. The budget simulator truly enlightened me to the difficulty in balancing the federal budget. The reason I felt compelled to share it with your office is that I tried to complete the simulator based on the principles that I always hear Mr. Luetkemeyer talking about, including no "job-killing" cap and trade or value-added taxes, supporting our troops, repealing the health care bill, and maintaining tax cuts. I couldn't even come close to making it work.

I know that working to control our national debt is one of Congressman Luetkemeyer's biggest priorities in Washington. Therefore, I figured that I must be misinterpreting his stance on many issues. That is why I am asking that Mr. Luetkemeyer complete the budget simulator and share his results with his constituency, possibly via his website. This would be instrumental in educating Missourians like myself not only of the severity of the debt problem, but exactly what our representative is fighting for in order to solve this problem.

Thank you for making my day. I thought the simulator was amazing, and it sobered me up to the scope of the problem.

I'm trying to get an easy way to post my selections, so you can see my guesses.

I think your communication to your rep is exactly what we need.

Good on ya, mate.