Oh sure, but then the guy next door gets a bigger one...

The farm horsepower race is about to get personal. 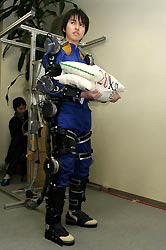 The "farming robot suit," developed by a team of researchers led by Shigeki Toyama, a professor in the graduate school of the Tokyo University of Agriculture and Technology, has been tested on farms. Researchers hope to have the technology in use in 2 years and develop it into a product and begin selling it in four years.

The suit, which is secured with belts, consists of a resin framework with eight motors to assist the movements of the knees, elbows, lower back and shoulders, making farm work easier.

When pulling out a Japanese radish, for example, about 20 kilograms of instantaneous pressure is exerted on the knees and lower back, but when using the robot suit, only about half the force is used. [More]

(Just how big are Japanese radishes, anyway?)
Posted by John Phipps at 5:11 PM