If you could sidestep the gooey sentiment too often attached to farmers markets, you might be able to do some serious research on the possibility of this retailing effort. Unfortunately, about all we have to go on are scattered reports more interested in the human interest angle, food quality claims, or animal welfare concerns.

Still running across stories like this suggests to me the local-to-market effort is growing up and addressing some stark realities like, well, winter.

A coalition of religious groups stepped in and paid an electric bill for his farm near Blanchardville in southwestern Wisconsin. Now he's paying them back and earning a profit as he sells his wares at indoor markets that have become popular in Wisconsin, Illinois and Iowa in winter months. "It's a real good feeling," Ruegsegger said. The markets in church halls, which began in December 2003, are being coordinated by the Churches' Center for Land and People, a coalition headquartered at Trinity Episcopal Church in Janesville. It is composed mostly of religious denominations and orders in the three states.

The indoor markets provide farmers with a place to sell until outdoor markets reopen in the spring, said Tony Ends, the coalition's executive director. The farmers are asked to donate 10 percent of their market proceeds to the Harvest of Hope emergency fund to help farm families get through financial difficulties. Ruegsegger — who raises grass-fed beef, free-range eggs and chicken, goats, turkey and lamb — said the Harvest of Hope helped his farm stay in operation by paying his electric bill. Then sales at the winter markets "helped us survive through winter the first couple of years." [More]

While I unreservedly support the humanitarian aspect of such efforts, it nonetheless is hard to derive a pattern for expansion from these stories. Too many consumers are used to non-seasonal food, available 24/7. Perhaps these ventures will remain a niche - even luxury - category of food retailing.

This is not how proponents of the local food movement sell it, but it is obvious the best intentions in the world can't overcome the vast numbers of food consumers who need to be fed every day. Still, I often get pretty optimistic about how far agrarian agriculture can go in the US. Maybe it's because I live with a gardener, and have developed the same seasonal appetites as local food advocates (strawberries in May/June - not Dec, etc.) 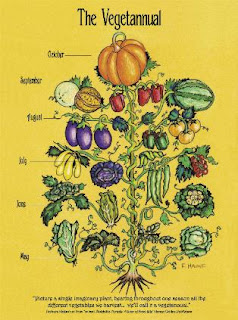 The increased availability of local food in any area is a direct function of the demand from local consumers. Most of us are not accustomed to asking about food origins, but it’s easy enough to do. First: in grocery stores when the cashier asks if you found everything you were looking for, you could say, “Not really, I was looking for local produce.”

The smaller the store, the more open a grocer may be to your request. Restaurants may be even more flexible about food purchasing, and your exchanges with the wait staff or owner can easily include questions about which entrees or wines are from local sources. Restaurateurs do understand that local food is the freshest available, and they’re powerful participants in the growing demand for local foods. You can do a little homework in advance about what’s likely to be available in your region. [Much more]

The local food concept seems self-evident. It is not always economically valid however. The efficiencies of large farms with natural advantages to grow adapted crops is enormous. The major objection I have to buying local is it violates common sense by making the address of the grower the center of the transaction. What if an equally picturesque grower from two counties away is successful and offers much better stuff? Do you still by from the guy next door?

Still, as we have learned from our garden tomatoes, often local is the only way to eat well.
Posted by John Phipps at 7:31 AM