Job safety makes sense because of the economic costs alone. Somehow though, we forget how powerful that force is and turn instead to regulation.

Consider this analysis of the effectiveness of OSHA. 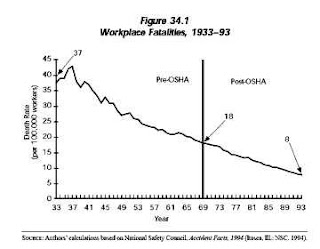 His point: Market incentives for worker safety dwarf legal incentives, which in turn dwarf regulatory incentives. The level of safety we see in the workplace today is about the same as the level we'd see if government just looked the other way. [More]

Of course, you'll convince few in the public or government of this phenomenon. And more than a few bureaucratic jobs with the last good benefits in America are based on not believing these numbers.