We now have mounting evidence about the "U"-shaped happiness curve, which suggests the 40's for women and the 50's for men carry them through some deeply imprinted patterns of unhappiness.

So what's at the root of this depressing dip? Not sure, say authors Andrew Oswald of Warwick University and Dartmouth's David Blanchflower, both economists. But they speculate, as Oswald put it, that "something happens deep inside humans" to bring us down rather than shattering events (such as divorce or job loss), because it tends to creep up on us over time.

"Some people suffer more than others, but in our data the average effect is large. It happens to men and women, to single and married people, to rich and poor and to those with and without children," Oswald said. "Nobody knows why we see this consistency."

"What causes this apparently U-shaped curve, and its similar shape in different parts of the developed and even often developing world, is unknown. However, one possibility is that individuals learn to adapt to their strengths and weaknesses, and in midlife quell their infeasible aspirations," he added. "Another possibility is that cheerful people live systematically longer. A third possibility is that a kind of comparison process is at work in which people have seen similar-aged peers die and value more their own remaining years. Perhaps people somehow learn to count their blessings."

The good news: the data show that most people emerge from this low ebb in their 50s. And, "by the time you are 70, if you are still physically fit, then on average you are as happy and mentally healthy as a 20-year old," Oswald said. "Perhaps realizing that such feelings are completely normal in midlife might even help individuals survive this phase better." [More]

Now on the farther shore of that passage, I have time and opportunity to notice instead with increasing frequency how our last innings are played out. While late-middle-agers joke about planning to die unexpectedly at 117 after water skiing too strenuously, we know the more likely scenarios are anything but.

But the fear of possibility of a "bad death" seems to loom ever larger with each year and the march of life-prolonging technology.

And accounts like this certainly add to this natural musing. 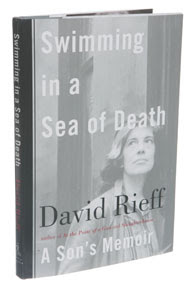 “A bad death” is another matter. We all know those when we see them, the miserably protracted and painful affairs that overwhelm everyone — the deceased and survivors alike — with panic, guilt and bitter regrets.

And now we have a new benchmark of bad. The writer Susan Sontag’s death, as set out in this short and immensely disturbing account by her son, David Rieff, must rank as one of the worst ever described.

For starters, it took a long time. Ms. Sontag was diagnosed with breast cancer metastatic to the lymph nodes in 1975, at 42. She survived the draconian treatment and the years spent expecting her unlikely remission to end, only to develop unrelated uterine cancer in the late 1990s. Again she survived, and again she developed a new cancer: this time myelodysplastic syndrome, a virtually untreatable variant of leukemia, probably related to the treatment for the first two. She died in 2004.

Three decades of having cancer, being treated for cancer or waiting for cancer to recur might bring out the inner philosopher in some. In Ms. Sontag, an inner adolescent seems to have emerged instead, with each battle and victory strengthening her determined appetite for life and her conviction that she was immortal. Intellectually, of course, she knew otherwise, but she balanced that age-old contradiction with the insouciance of a helmetless 18-year-old on a snowboard. “She believed in her own will, and, grandiose though it may seem, in her own star,” Mr. Rieff says in his book. “My mother came to being ill imbued with a profound sense of being the exception to every rule.”

To watch that kind of arrogance and bravery succeed is marvelous; to watch it fail, dreadful. For an elderly woman with a body weakened and deformed by prior surgery and bones oozing new malignant cells, failure was pretty much a foregone conclusion. [More]

I have watched with apprehension the extravagant end-of-life care now routinely poured out for the care of pets even after unnaturally long lives. As Americans become more attached to pets, the decision to euthanize is being confronted often and with great difficulty.

I think my uneasiness arises from the inevitable transfer of ethical behavior to people: "If I did it for Fluffy..." Now couple that too-familiar example with demographic tides.

Given we have not particularly graceful during other life passages, I suspect Baby Boomers will redefine (or simply lower the bar) for "bad death". Nor will this be an inexpensive phenomenon.

Maybe we call it a U-curve simply because we Boomers haven't had enough time to add the last descender and reveal it as a "y" curve.