Jan and I are at Steamboat Springs to determine if we can still ski after a 12-year layoff. I plan to post when I can, but theoretically it is a vacation, ya know. But thanks to the time change, altitude and just being 60, we woke up at 5:30 local and here I am. 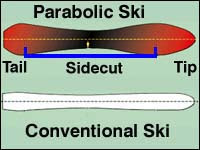 Since we skied last, the technology of the whole business has changed with new shorter, curved skis.

Like all skis, the original alpine "downhill" skis were little more than glorified planks of wood. Eventually metal edges were added to better grip the snow and ice of a ski trail and for durability. Downhill ski construction has evolved into much more sophisticated technologies. The use of composite materials, such as carbon-Kevlar, made skis stronger, lighter, and more durable. In the late 1980s and early 1990s, spearheaded by ELAN, manufacturers began producing parabolic "shaped" skis (when viewed from above or below, the center or "waist" is significantly narrower than the tip and tail). Virtually all modern skis are made with some degree of side cut. The more dramatic the difference between the width of the tip waist and tail, coupled with the length stiffness and camber of the ski, the shorter the "natural" turning radius. Skis used in downhill race events are long with a subtle side cut as they are built for speed and wide turns. Slalom skis—as well as many recreational skis—are shorter with a greater side cut to facilitate tighter, easier turns. Many ski manufacturers label skis with their design turn radius on the top. For a racing slalom ski, they can be as low as 12 meters (40 ft) and for Super-G they are normally at 33 meters (108 ft). However, for off-piste skis there is a trend toward wider skis to better float on top of powder snow. This means skiers have a huge range to chose from depending on individual needs and application. The ski is turned by applying pressure, rotation and edge angle. When the ski is set at an angle the edge cuts into the snow, the ski will follow the arc and hence turn the skier; a practice known as carving a turn. While old fashioned "straight skis" which had little side cut could carve turns, great leg strength was required to generate the enormous pressure necessary to flex them into a curved shape for carving, a shape called "reverse camber". Now, when one a modern, hourglass-shaped ski is tilted on to its edge, a gap is created between the ground and the middle of the ski (under the binding) as only the sides near the tip and the tail touch the snow. Then, as the skier gently applies pressure, the ski bends easily into reverse camber. Influenced by snowboarding, during the 1990s this shaping of the ski became significantly more pronounced to make it easier for skiers to carve turns. This makes skiing much easier to learn, because the skis turn with much less effort when placed on edge. Such skis were once termed carving skis, shaped skis, or parabolic skis to differentiate them from the more traditional straighter skis, but nearly all modern recreational skis are produced with a large degree of side cut. [More]

The rental folks assured us they make it even easier to manage the slopes. We'll see.

Maybe I'll post some pictures of a lovely ski bunny on the slopes as well.

(No - I'm talking about Jan, you unromantic clod)
Posted by John Phipps at 7:10 AM