Are so painful for this engineer: we talk about design, and graphics, and style.
EEE-yewww.

But apparently that kind of stuff can make or break a magazine since this book you DO judge by the cover. And when our own Dairy Today made a big splash with their cover, it reinforced the point.

A magazine is that rare publication in which you're actually expected to judge a book by its cover. This explains why a good magazine cover — like a good book jacket or, say, a poster — benefits enormously from a great, central, visual idea, which is one reason why portraits are so ideally suited to covers. This is perhaps particularly true of fashion and lifestyle magazines — things like Vanity Fair and Vogue — publications that typically enlist a celebrity's likeness to help sell magazines. With such an unbeaten formula for success, clearly the barnyard is the next logical step. Or is it? Unlike their consumer counterparts, trade magazines aren't obliged to sell themselves in quite the same full-frontal manner. They're not competing for the same kind of attention in a dense visual marketplace. Their circulation is mail-driven — not newsstand-driven — but does this mean they don't deserve the same attention to scale, drama, impact? D.J. Stout's recent redesign for Dairy Today reminds us that a good magazine cover depends less on a magazine's circulation and content, and perhaps more on the art director's imagination and skill. But you're nothing without a star. Some years ago, I wrote an essay on the uncredited art directors of trade magazines, in which I went to great lengths to learn more about — of all things — poultry farming. When I saw the new and improved "Dairy" I wondered: beyond the white background and the big nameplate and that exquisite bovine mug, what was so different from those magazines of long ago? [More for you art history majors] 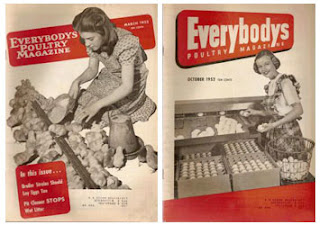 My observation is putting a cute chick on the cover is never a bad idea.