This was my future...

I was 8 years old when I was reading stories like this about what farming would be like right now. 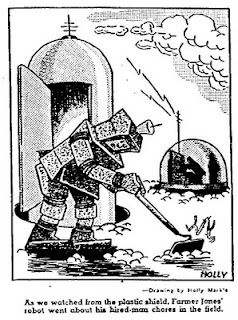 Farmer Jones stepped to a small black instrument panel at the rear of the air-conditioned plastic "bubble" in which we sat, my wife seated beside me - I had brought her along to write the woman's angle of this interview with a Year 2000 farm family for "Atomic Life." We had just come up a ray-powered elevator from the family's spacious bomb-and-fungus-proofed, solar-conditioned subsurface quarters. We were surveying his fields.

Farmer Jones pressed a button marked "Activator." There was a slight hum and a cylinder rose in the field a few feet beyond the clear plastic wall. A door opened in the cylinder and a robot, closely resembling a 1956 man, stepped jerkily out into the field.

"I must apologize for my hired hand," Farmer Jones said lightly, "Since full parity prices have been removed from our crops, I haven't been able to afford a newer model. But, he has served me well. A couple of new tubes and a paint job will tide him over for another year or two." [More]

Note the mention to parity prices - we really have been conditioned to socialized agriculture for a long time haven't we?