I had never seen this.  The chart is generated from a large basket of ag product prices with currency differences normalized, and published just like any stock price chart.  I should think it would be a good addition to our usual ag charts in our media.

Is it me, or does it look like another 2008 event coming? 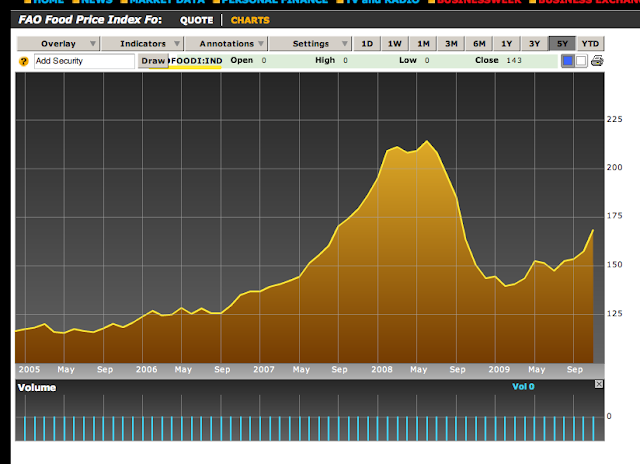 Falling production in commodities from rice to milk is bad news for just about everyone except investors.
Rice may surge 63 percent to $1,038 a metric ton from $638 on Philippine imports and a shortage in India, a Bloomberg survey of importers, exporters and analysts showed. The U.S. government says nonfat dry milk may jump 39 percent next year, and JPMorgan Chase & Co. forecasts a 25 percent gain for sugar. Global food costs jumped 7 percent in November, the most since February 2008, four months before reaching a record, according to the United Nations Food and Agriculture Organization.
Farm prices this year lagged behind copper futures that doubled and oil’s 57 percent increase. A recovery from the worst recession since World War II would spur food demand and boost costs for buyers of commodities including milk processor Dean Foods Co. while increasing the number of hungry people that the UN says now exceeds 1 billion.


“Agricultural commodities will be a great investment in the next three to five years,” said Oliver Kratz, who manages $10 billion as head of Global Thematic Strategy investments at Deutsche Bank AG’s DB Advisors in New York, including $3 billion in agriculture. For those who can’t afford to pay more for food, there’s the “painful” risk of hunger, he said. [More]

It could be this forward-thinking is underlying some of the curious strength in our grain markets.  It certainly seems likely to be a factor in the resurgence in land prices.

These are not isolated examples.

I never did think the "softening" of land prices had much validity, but know my bias is too strong to be objective. Suddenly a piece of ground we just purchased "way over the market" looks a little less foolish.
Posted by John Phipps at 8:36 AM

I would be curious to where exactly in South Dakota...perhaps for development outside of Sioux Falls.

Keep up the good work.

I should have paid more attention, but my SD geography is pretty sparse. I think they were from Vermilion, maybe?

Own good midwest farmland! It will never disappear like Enron!!!