I had never seen photos of a Russian Typhoon class submarine.


Typhoon class submarines feature multiple pressure hulls that simplify internal design while making the vessel much wider than a normal submarine. In the main body of the sub, two Delta class pressure hulls lie parallel with a third, smaller pressure hull above them (which protrudes just below the sail), and two other pressure hulls for torpedoes and steering gear. This also greatly increases their survivability - even if one pressure hull is breached, the crew members in the other are safe and there is less potential for flooding.

Six Typhoon class submarines were built, with each carrying 20 R-39 missiles (SS-N-20) with a maximum of 10 MIRV nuclear warheads each. Originally, the submarines were designated by hull numbers only. Names were later assigned to the four vessels retained by the Russian Navy, which were sponsored by either a city or company. The construction order for an additional vessel (hull number TK-210) was canceled and never completed. Only the first of these submarines to be constructed, the Dmitriy Donskoy, is still in active service with the Russian Navy, serving as a test platform for the Bulava (SS-NX-30) missile which is currently under development. The Arkhangelesk (TK-17) and Severstal (TK-20) remain commissioned, though not currently active with the Russian fleet. All the R-39 missiles have been retired. The Typhoons are slated to be replaced by the Borey class starting in 2009. [More]


They came and went after my service (but then so did a LOT of stuff).  These boats were huge! 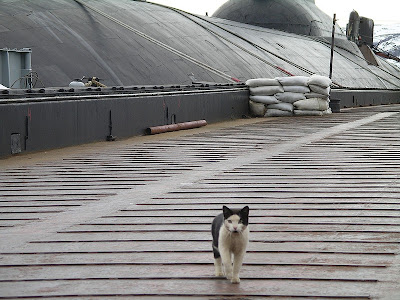 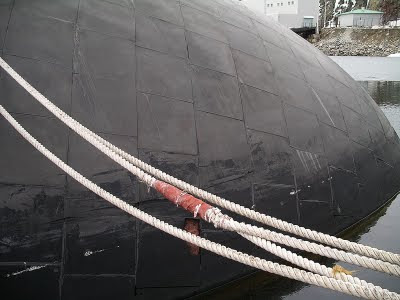 (Not the best welding I've seen for an outer hull) 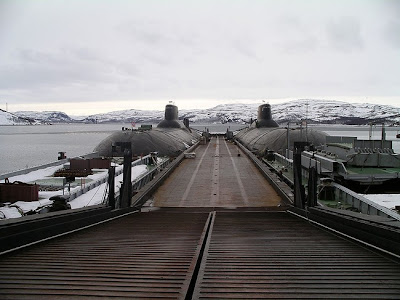 [Lots more pics - including the pool/spa]