I am married, through extraordinary good luck, to a woman of Swedish/Dutch heritage.  Jan enjoys the traditions of both sides of her family heritage and our house is crammed right now with Dala horses, straw goats, and various other Swedish God Yul Jul stuff.  Never mind these people used to set fires on little girls' heads as a part of Christmas celebration. 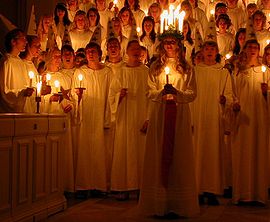 Accustomed as I was to their strange carols and non-Methodist ways, I had made my cultural peace with such quaint Old World practices. However, it was disconcerting to see this inexplicable Swedish Christmas custom revealed.


Three years ago, I went to Sweden with my then-girlfriend (now-wife), to meet her family and celebrate my first Christmas. As an only partially lapsed Jew, I was not well-versed in Christmas traditions, and I was completely ignorant of Swedish customs and culture. So I was prepared for surprises. I was not prepared for this: Every year on Dec. 24 at 3 p.m., half of Sweden sits down in front of the television for a family viewing of the 1958 Walt Disney Presents Christmas special, "From All of Us to All of You." Or as it is known in Sverige, Kalle Anka och hans vänner önskar God Jul: "Donald Duck and his friends wish you a Merry Christmas."
Kalle Anka and the Aracuan BirdKalle Anka, for short, has been airing without commercial interruption at the same time on Sweden's main public-television channel, TV1, on Christmas Eve (when Swedes traditionally celebrate the holiday) since 1959. The show consists of Jiminy Cricket presenting about a dozen Disney cartoons from the '30s, '40s, '50s, and '60s, only a couple of which have anything to do with Christmas. There are "Silly Symphonies" shorts and clips from films like Cinderella, Snow White and the Seven Dwarfs, and The Jungle Book. The special is pretty much the same every year, except for the live introduction by a host (who plays the role of Walt Disney from the original Walt Disney Presents series) and the annual addition of one new snippet from the latest Disney-produced movie, which TV1's parent network, SVT, is contractually obligated by Disney to air. Kalle Anka is typically one of the three most popular television events of the year, with between 40 and 50 percent of the country tuning in to watch. In 2008, the show had its lowest ratings in more than 15 years but was still taken in by 36 percent of the viewing public, some 3,213,000 people. Lines of dialogue from the cartoons have entered common Swedish parlance. Stockholm's Nordic Museum has a display in honor of the show in an exhibit titled "Traditions." Each time the network has attempted to cancel or alter the show, public backlash has been swift and fierce. [More]


OK, maybe it's no different than me and White Christmas or The Christmas Story or It's a Wonderful Life.


Nope, this is fundamentally different.

Well, it's too late for me, but for those of you who have children about to marry into this culture, ponder this deeply.  Sure Swedish descendants  tend to be tall, attractive people, with exquisite manners and superb cooking skills and strong family values, but we're talking about a cartoon duck on Christmas eve, fer Pete's sake!
Posted by John Phipps at 4:13 PM

And I grew up in a good Quaker Church and and a good Quaker family with a great grandfather who was a preacher. Then I married a METHODIST! But we have been happily married over 50 years. Guess Methodists are OK!!!