Arctic Norwegians were amazed by an atmospheric unprecedented atmospheric display that seems a little UFO-ish for many. 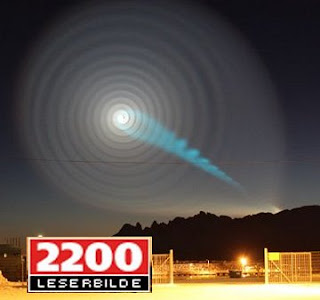 But I think it's legit.


The first reaction of many readers when they see this picture is Photoshop! Surely this must be a fake. But no, many independent observers witnessed and phtotographed the apparition. It is real.
Banbury continues: "It consisted initially of a green beam of light similar in color to the aurora with a mysterious rotating spiral at one end. This spiral then got bigger and bigger until it turned into a huge halo in the sky with the green beam extending down to Earth. According to press reports, this could be seen all over northern Norway and must therefore have been very high up in the atmosphere to be seen hundreds of km apart."


UPDATE (2 a.m. EST, Dec. 10): Circumstantial evidence is mounting that the phenomenon was caused by a malfunctioning suborbital rocket, possibly a Bulava ICBM launched from a Russian submarine in the White Sea. A Navtex no-fly alert was issued for the White Sea on Dec. 9th, and photographers have recorded what appears to be the initial boost phase of a launch beneath the spiral (see inset). A rocket motor spinning out of control could indeed explain the spiral pattern, as shown in this video of a Trident II missile launched from a US submarine in 2007. The Russian rocket hypothesis is plausible, but it has not yet been confirmed. [More]

I immediately tried to picture the reaction on the Ruskie sub.

It's not too often you have failures this photo-spectacular.  I think we should ask them to do one on New Year's eve.
Posted by John Phipps at 8:38 AM