"Most affordable" for some...

The deceptive claim touted by farmers that the American consumer spends only "about 10% of disposable income on food" is becoming more outlandish every year.

Instead of the USDA (ERS), let's see how the BLS adds up the numbers. 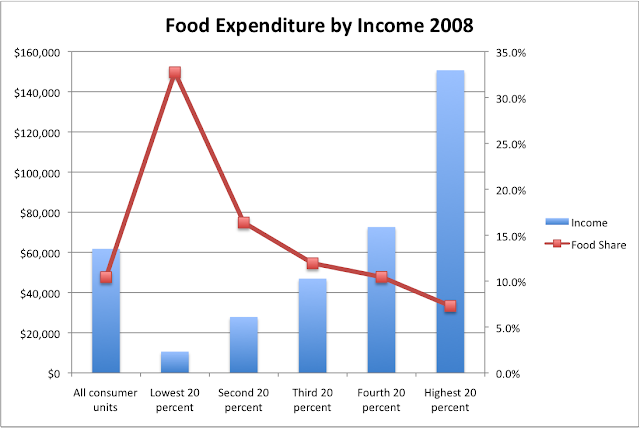 As I have perhaps mentioned before averages are nearly useless in describing the issue (represented by the first bar/point).  This chart (drawn from recent CES surveys) also has some caveats, since low income households receive food aid, like food stamps.  (This would make the first quintile closer to a mere 16% of expenditures, rather than income. See the data table)

Nonetheless, only the top third of Americans get to enjoy the "most affordable food".

But judging by our relentless drive to eliminate the estate tax for the very wealthy, those are the only folks we seem to be concerned with.
Posted by John Phipps at 3:05 PM

Well, who writes the "Campaign Contribution" checks? These occasionally have to be spent on pesky things like campaign expenses but are more usually utilized as private income.