After literally years of hype, the Boeing 787 Dreamliner may actually leave the ground. 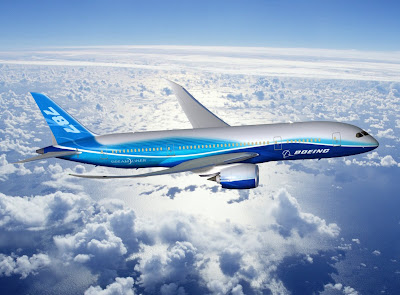 After more than two years of delays, Boeing Co. said Thursday that it plans to fly its new 787 Dreamliner for the first time as early as next Tuesday. The exact timing of the much-anticipated first flight depends on external factors, such as the weather at the airport near Seattle, the company said in a statement.

The Dreamliner's first flight-which has been pushed back multiple times-will be a major milestone for Boeing's marquee commercial airplane program. Boeing plans to fly the plane on a four to five hour test flight departing from Boeing's factory at Paine Field in suburban Everett, Wash., north of Seattle. If all goes according to plan, the Dreamliner will eventually land 30 miles south at Boeing Field in south Seattle, where the 787 test planes will be based.

Boeing executives for the past few months have insisted the Dreamliner will fly by year's end, staking much of their own and the company's credibility on making it happen. For the past few weeks, the industry has been trying to guess the exact date of the first flight. Internally, Boeing had targeted Dec. 22, according to people familiar with the details, but had been hoping to ready the plane for an earlier flight, if for no other reason than to give themselves breathing room to account for weather delays and other potential snags. [More]


How would you like to be a project engineer at Boeing this week?

I have always wondered about the business plan that pre-sells a product so heavily that anything less than spectacular performance is perceived as bad news. It now seems to be the norm, since so much technology has a long development time and the marketing department gets pretty desperate to sell even vaporware.

Our own seed industry is coping with such strategies, and I think 2010 will be sobering reality check for neatly calculated rollout schedules and aggressive marketing campaigns.


Pioneer Hi-Bred said Friday that disappointing yields in field tests will cause it to delay the release of the newest generations of herbicide-resistant corn seed to about 2015.

The Johnston seed company had hoped to introduce the genetically altered Optimum GAT seed lines by next year to challenge the leading seller of corn seed, Monsanto. Shares of Pioneer's parent, DuPont, fell more than 7 percent Friday on the news.

A DuPont investor, Jake Dollarhide of Longbow Investors of Tulsa, Okla., called the news a "huge hit" for Pioneer. [More]


Stuff goes wrong. Customers know this. Over-ventilated technology promises are causing all forecasts to be viewed as fluff.  I think big market advantages will accrue to companies that deliver unheralded innovations that work from Day One.
Posted by John Phipps at 11:35 AM