[Given the debate of mileage mandates in the energy bill, I looked this post up to refresh where we were a year ago]

One of the consequences of the turmoil in the energy markets is increased scrutiny of energy production, consumption and policy. For farmers who have been long accustomed to being the resident experts and protagonists for ethanol, the world may be about to shift.

We have already seen a flood of outside money coming into biofuel production investment. Indeed, early ethanol farmer-investors could become wealthy former investors as extremely attractive offers are made. But judging from the ink and bandwidth devoted to the topic of energy policy, farmers could soon become minor players in an area they regard as their own turf. It will be hard to keep in mind that being first does not grant preeminence. We may also discover that as more "outsiders" analyze US energy/ag policy they may see other solutions.

One idea that seems to resonate is fuel efficiency improvement. I don't see farmers lining up beind this idea, except to try to squeeze every last drop out of their own personal energy dollar. It may be we see higher fuel efficiency as shrinking the market for biofuels. Or that we won't be able to buy gas guzzling pickups anymore.

General Motors has ordered its engineers to ensure each car and light truck it produces meets or beats the best fuel economy of its rivals as the carmaker reacts to concern among US drivers about petrol prices and oil imports.

Bob Lutz, vice-chairman and head of product development, said the world's biggest carmaker had set a target of being the best in almost every segment, even if it meant sacrificing performance or increasing cost.

This is short-sighted. We could gain significant credibility by choosing the right way on this issue. While all of us will be griping about our own fuel costs and starting to pay attention when tractor manufacturers talk about new engines, few of us will truly embrace consumption changes because we are afraid of who we will be siding with. Increased fuel efficiency is an important part of a rational energy policy. 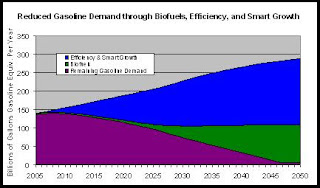 For what it is worth, I support strong mandates (hey- we demanded them for ethanol, remember) for increased fuel efficiency in all motors.

And I can make it happen by the way I spend my machinery dollars.

[Sorry about the graph -the original was just as unreadable, but it shows the relative importance of efficiency (blue), biofuels (green) and the remaining gasoline demand]

Update 7/23: A good explanation about how this super-enthusiasm may cause an alternative-energy bubble, but that's OK too.

A similar process may be unfolding now in the alternative-energy business. Many of these venture-backed alternative-energy firms will fail, and some of the publicly held ethanol stocks will turn out to be turkeys. But fierce competition will lead to price reductions in energy-saving equipment. The vast sums being plowed into research may lead to incremental improvements or revolutionary breakthroughs. And as more giant companies such as Wal-Mart become consumers of alternative-energy products and services, the industry will gain scale—a development that leads to price reductions for all consumers. So, let's hear it for the Prius Bubble.